You Can’t Go Back (and, sometimes that’s OK ) 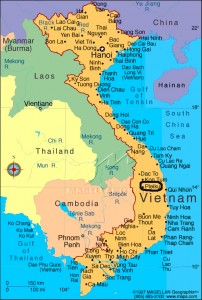 Most of the one year I spent in Vietnam in 68-69 was in the central highlands near a town called Pleiku. It is not far from the border with Laos and Cambodia and it sits on an elevated plateau with beautiful mountains not far in any direction. Its elevation of 2,500 feet above sea level keeps it from getting as hot as Saigon and the southern parts of the country. It’s at about the same latitude as Sakeao Province, Thailand, where I taught English last month. But, Sakeao, which sits barely above sea level is much hotter than Pleiku. Pleiku is dry and mostly sunny from November through April and very rainy during the rest of the year, aka the “monsoon season.” In the winter, it never gets below about 50 degrees Farenheit but I remember that it felt colder than that when you were sitting in a guard tower during the middle of the night.

In 1969, Pleiku was a small village surrounded by massive military (both U.S. and South Vietnamese) installations. The American units in the area included infantry (4th Division at Camp Enari), engineers (my boyhood friend Allen Wood was stationed on “Engineer’s Hill” and I visited him there once), artillery, Air Force (at Pleiku Air Base), and a medical evacuation unit (71st Evac or “MASH”.) Those of us with Signal Corps occupations lived in the U.S. Signal Corps compound on a hill just north of the airport, a place from which our large antennas could communicate with receiving antennas at other sites in distant cities like Danang, Vung Tau, Nha Trang, and Ubon, Thailand. Our antennas used a method called tropospheric scatter to “bounce” the microwave signals off of the lower atmosphere to a receiving antenna which might be a few hundred miles away. This technology led us to refer to our location as “Tropo Hill.” 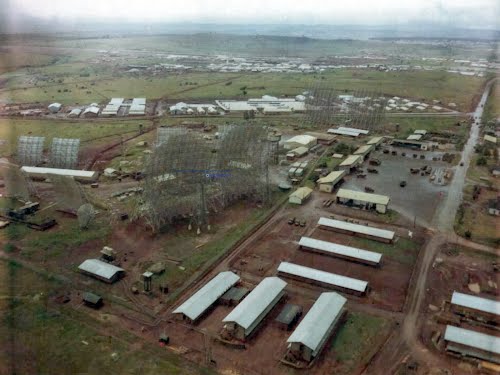 A view of our compound from the air is shown in the adjacent photo. I lived in the barracks at the bottom-center of the photo. We lived as do most soldiers in barracks, with a couple of men in each cubicle storing our personal belongings in foot and wall lockers. During the monsoon season, we hung lighted bulbs over our beds and inside our wall lockers to try to keep things dry. We worked on the microwave gear in the small buildings and vans near each pair of antennas (antenna pairs enabled redundant communications.) We usually worked 12-hour shifts and 7 days a week but the work was pretty easy, providing ample time for writing letters home, listening to music, reading, etc. We had our own mess hall and barber shop and our laundry was taken care of by local Vietnamese ladies who came on to the compound during the day. In general, there wasn’t much need to leave the compound and we were not encouraged to do so. Most of us felt the war was close enough and we didn’t need to go look for it. During the year I was there, we experienced occasional rocket and mortar attacks that kept us nervous but, luckily, no rounds ever landed too near us. The very loud booms of U.S. artillery guns made us very nervous until we learned to distinguish the sound of “outgoing” and “incoming” shells. Once you knew the difference you could save your fear for the appropriate moments. Several of us (including me) sustained minor injuries during these attacks by tripping or falling trying to get to a safe place like a bunker or ditch.

I made several good friends while stationed in Pleiku although I haven’t been good about staying in touch with them (this all occurred way before email existed!).  One special friend was Jay LeBlanc (below left) whom I first met at Fort Monmouth while we were going to the Signal School there.  Jay, who hails from Opelousas, Louisiana, is a very good man with a wonderful sense of humor.  When we met at the school, he was about 4 months ahead of me in the microwave course.  When he graduated, he went to Fort Huachuca, Arizona.  After that, he came to Vietnam and I was delighted to see him again. I reconnected with Jay just before this trip: he and his wife now live in the suburbs of Atlanta, Georgia. 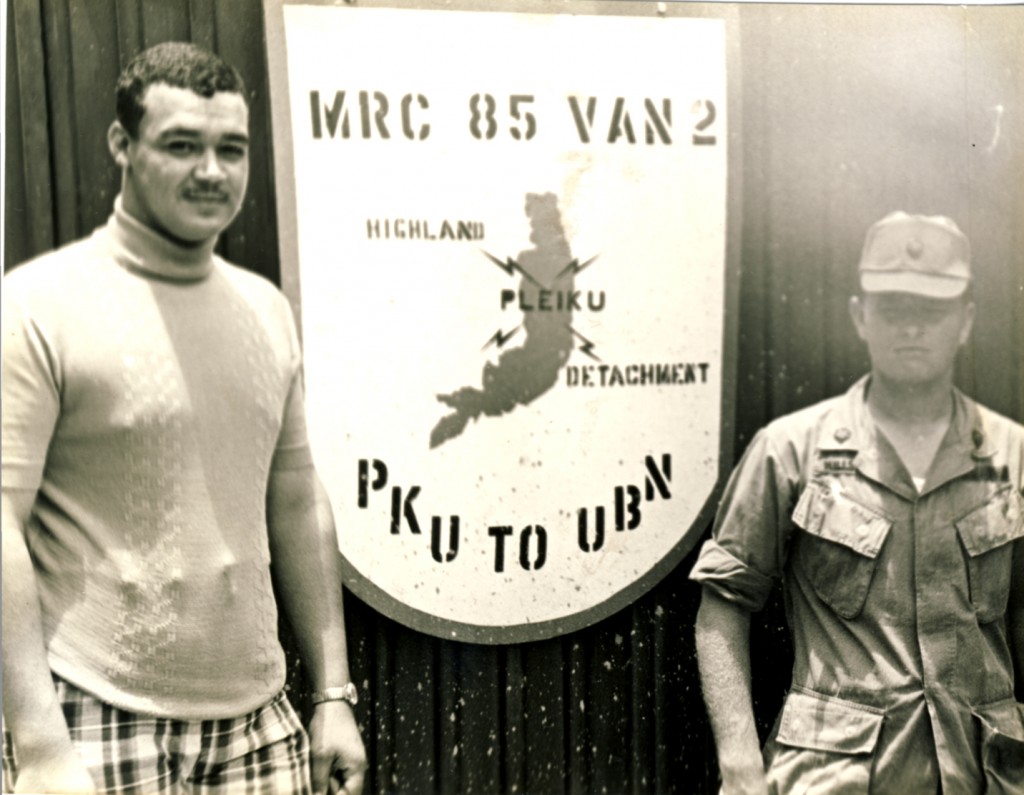 As I said before, Pleiku itself was just a small village at the time. We did occasionally hitchhike down to the village to walk around and have a beer or buy some souvenirs, but most of us never really tried Vietnamese food. Some photos I took in the village are shown below… 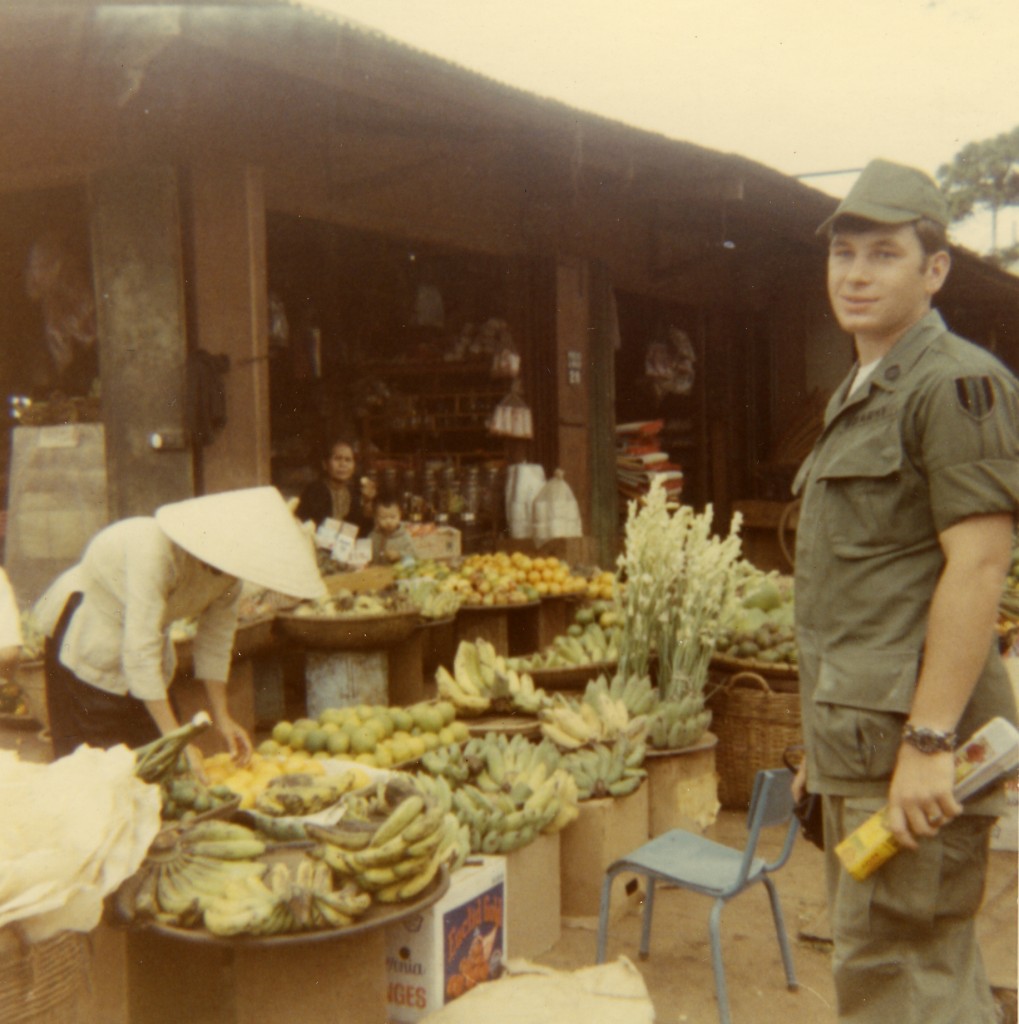 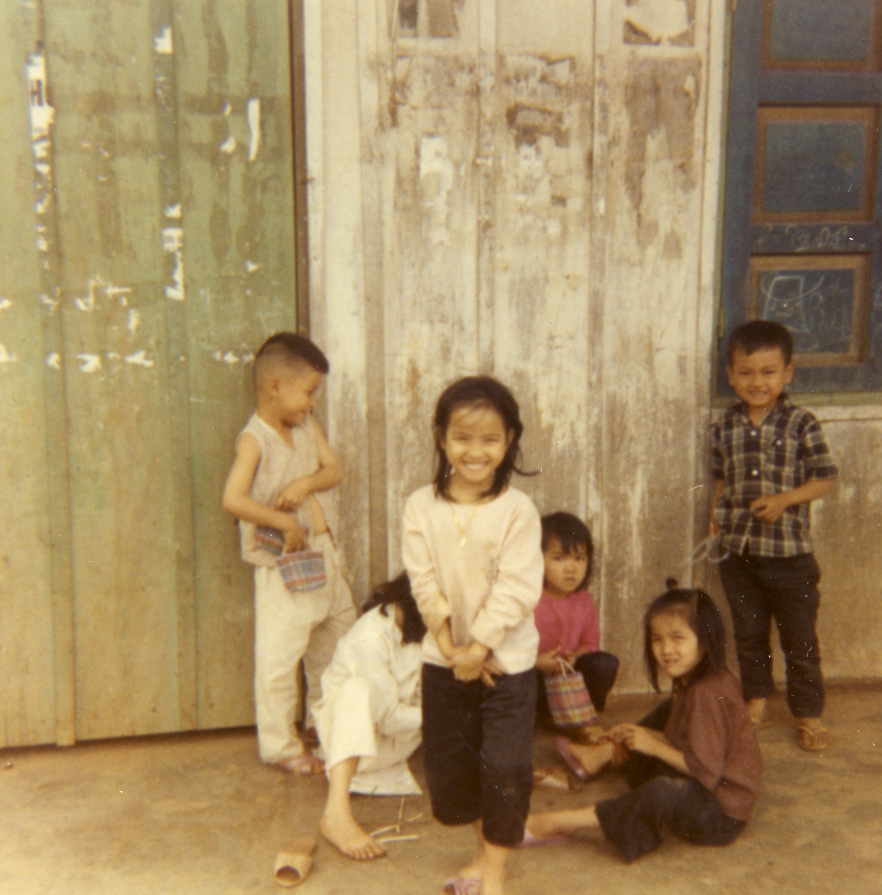 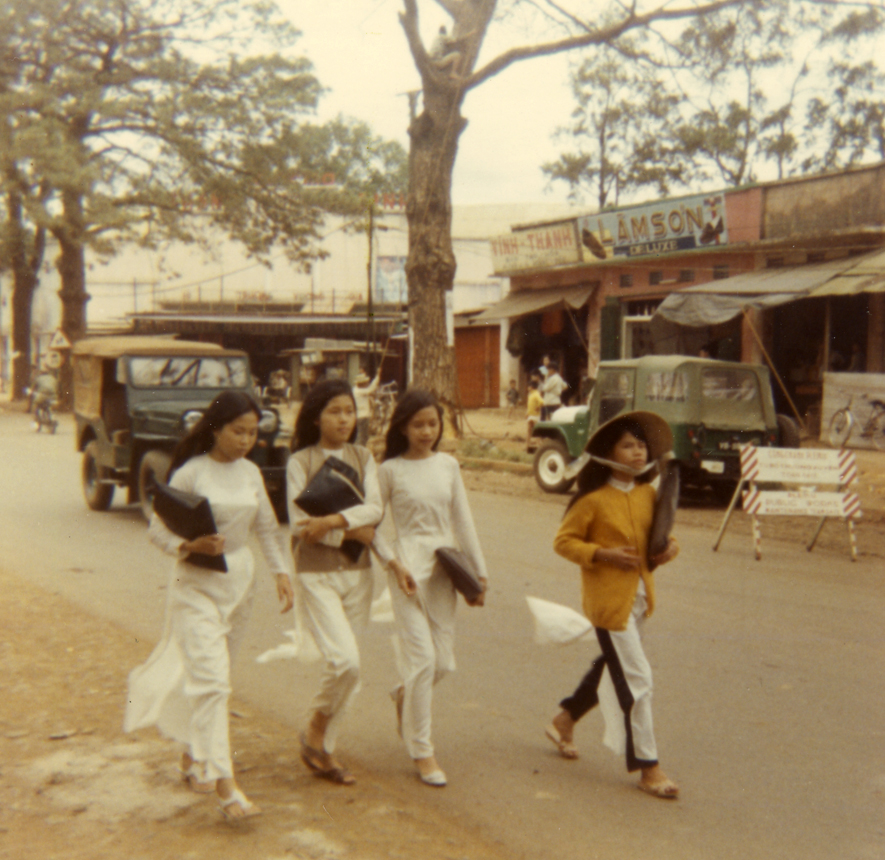 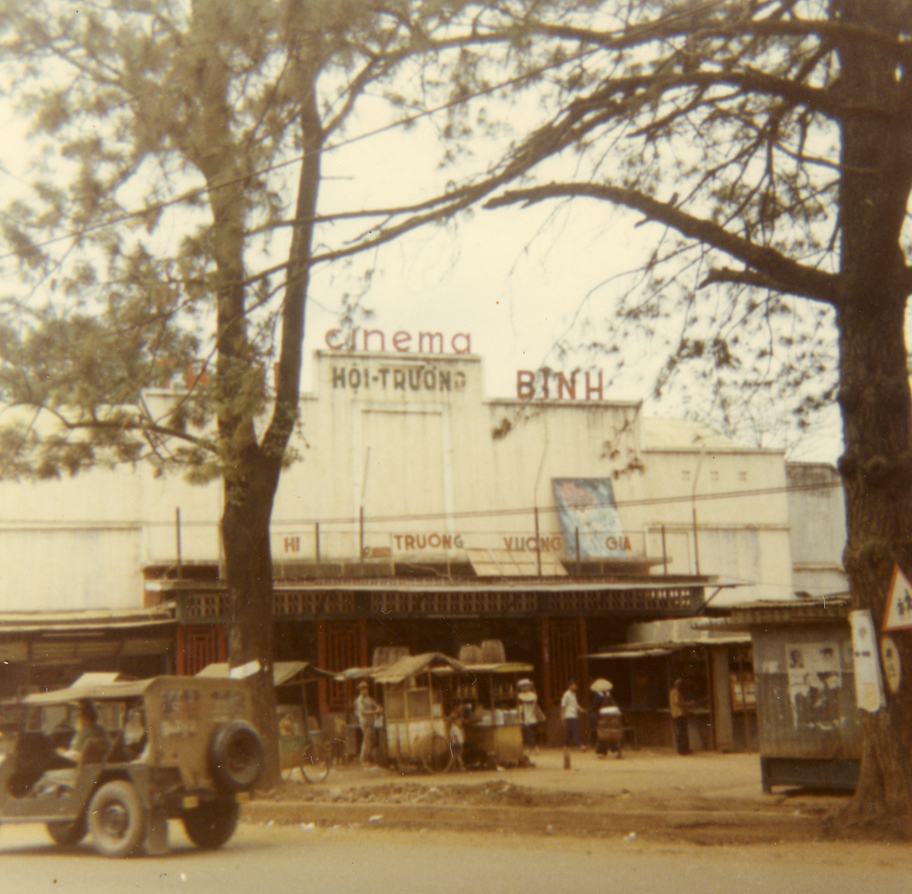 Pleiku did have its own Cinema

We also occasionally left our compound to visit the Pleiku Air Force base which was very near us. The Air Force people were always very friendly to us Army soldiers and the food of their “dining facility” was much better than that of our our “mess hall.” You could see antennas of Tropo Hill very clearly from the air base… 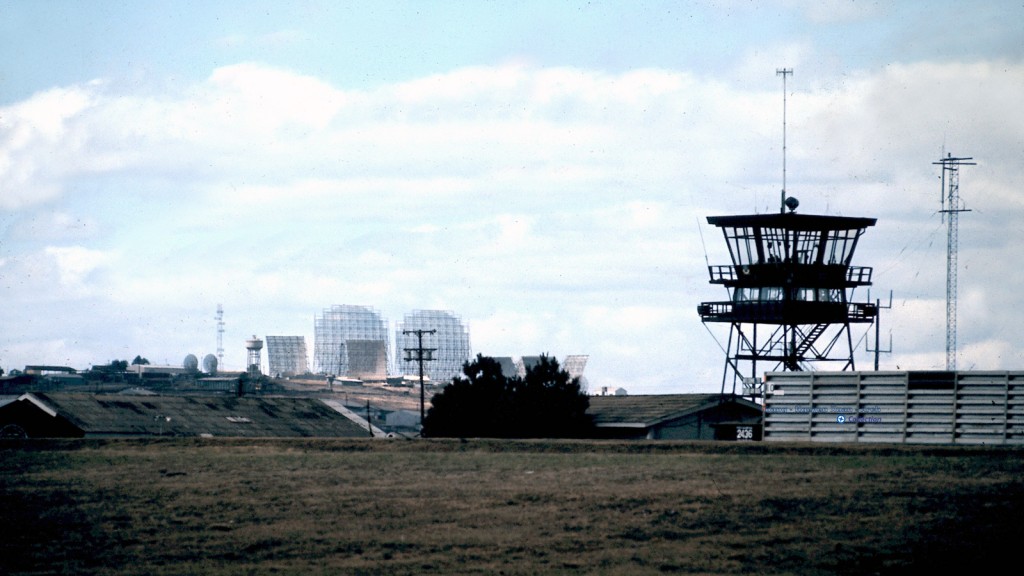 “Tropo Hill” as seen from Pleiku Air Base

The only other time I remember leaving the compound was the day we went out into the country to have firing practice. Of course, we all had guns: despite not being “fighting” soldiers we still had responsibility for guarding our compound and we regularly pulled guard duty during the dark hours. Most of us had M-14’s (fighting troops used the more modern M-16s) but I was issued an M-60 machine gun. The photo below shows the five of us who had these machine guns on the day we practiced firing them… 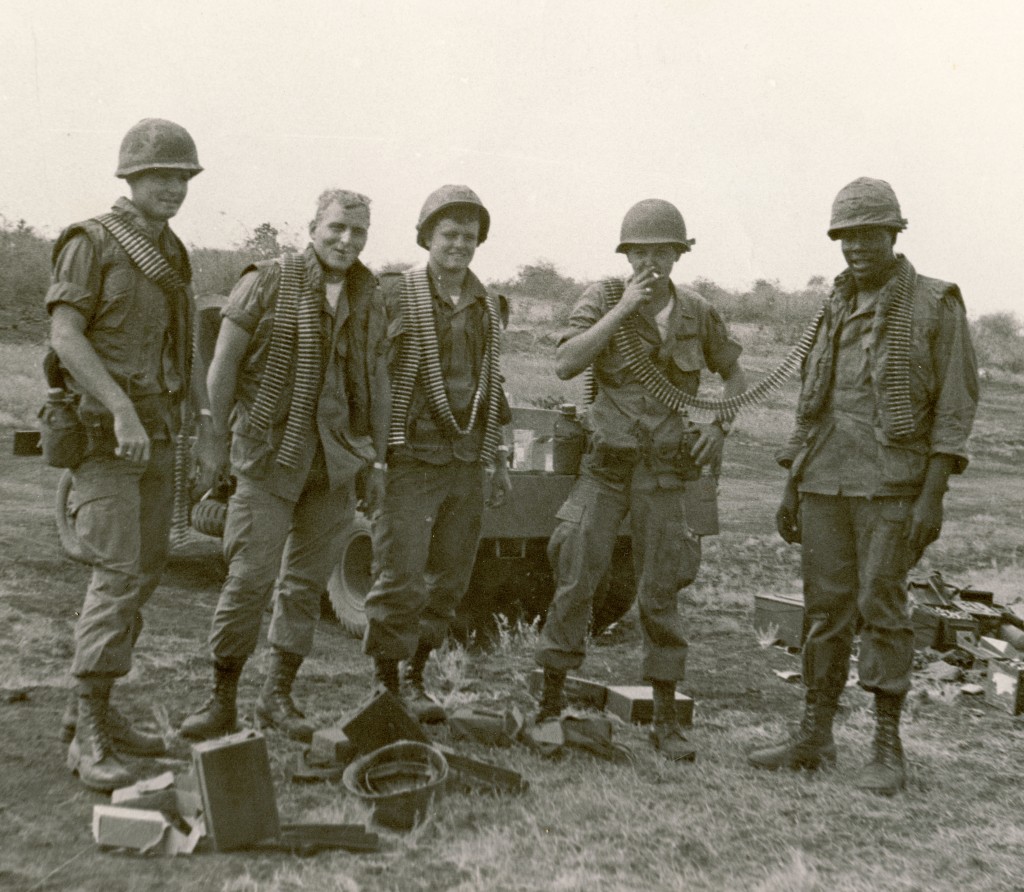 Finally, the following photo was taken before I went on guard duty one night. I couldn’t resist draping the bullet-belts over my shoulders “Pancho Villa style.” I feel a little guilty that I had the luxury of being a “pose for the camera” soldier while others were living and dying using the same weapon out in the field. But I guess most young men can’t resist the opportunity to look like a fighting hero for the folks back home. I no longer feel the need to appear as a tough fighting guy (but I wouldn’t mind looking young and thin again.) 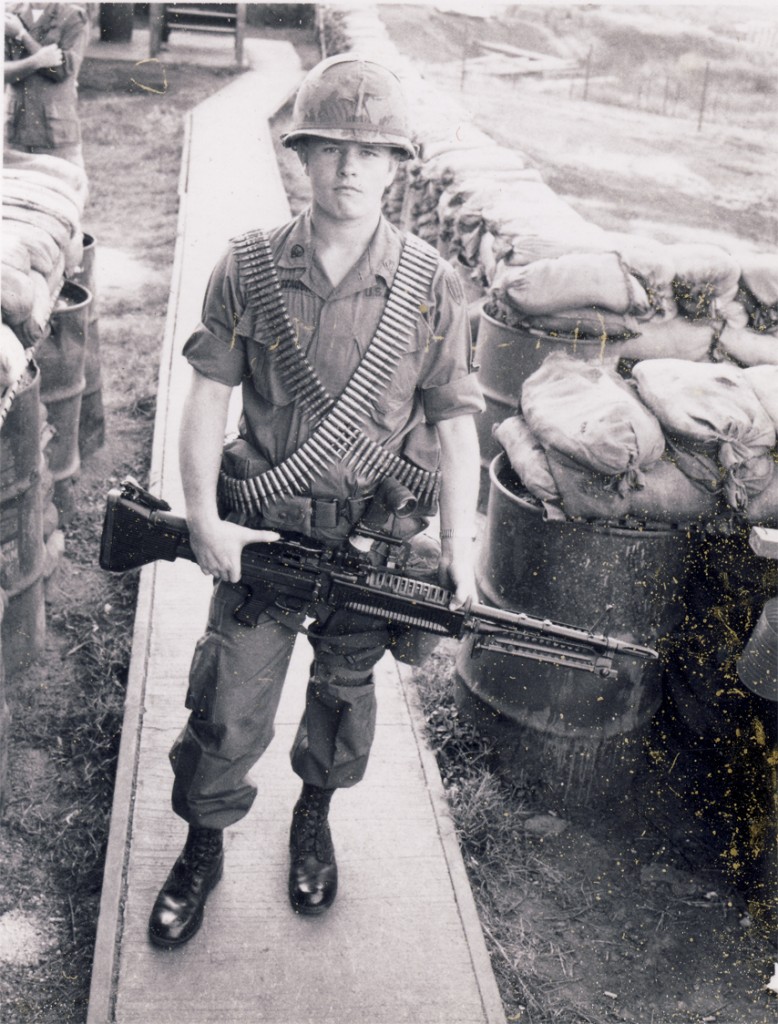 I’m not sure why I wanted to go back to Pleiku. Perhaps I just wanted to see the place where I had spent that long year of my youth. I also was just curious to see how Pleiku looks now that the war is over. From talking to other Pleiku veterans and from satellite images of Google Earth, it seemed certain that there was nothing left of Tropo Hill. All the buildings and the antennas seem to be just green areas now. It seemed amazing to me that such large structures would disappear like that: it would seem the structures could be used for other purposes. But, probably, the long, horrific war led the Vietnamese to want to purge anything that reminded them of the foreigners who had once dominated their countryside.

On Tuesday, the 4th of March, Michael and I left our hotel and took a taxi to Ho Chi Minh City international airport The airport is built on top of what was Tan Son Nhut Air Force Base, a massive air base serving the Saigon area during the war. It’s the airport I flew into when I to visited our Signal Corps headquarters in 1968. About the time Michael was taking off for home (via a stop in Hong Kong), I boarded a Vietnam Air flight to Pleiku. My plane was a ATR 92 Turboprop which reminded me a little of the C-123 military transport planes we flew on during the war. During our long taxi to the runway for takeoff, I saw some of the only remaining evidence of the war. In the video below, note the concrete U-shaped “bunkers” along the taxi-way. I believe these were used to shield grounded aircraft from incoming enemy fire. The blocks they are made from are massive which may explain why there were not removed.

The flight to Pleiku took less than three hours. I had chosen a window seat on the right side of the plane because I thought that I might catch a glimpse of where Tropo Hill had once been when we were landing, but I really couldn’t see much from the plane. The small airport terminal building is, of course, new and I think it may be on the opposite side of the runway from where the U.S Air Force base passenger terminal was. The terrain surrounding the airport felt familiar. I could tell where our antennas had been just a mile or so north of the airport. Later, with the help of the young tourguide I had hired to help me during my two days in Pleiku, I went back to the airport and took a video from the parking lot across from the airport terminal. You can see some sort of apparatus on the hillside near the airport but I don’t know what it is. I think the former site of Tropo Hill might be a little beyond this apparatus. In any case, the entire area is now a restricted Vietnamese military installation and my guide said getting any closer would not be possible.

There is no resemblance of modern Pleiku to the village it was in 1969. The village has been swallowed up by a large, sprawling metropolitan area that looks like so many other large cities in southeast Asia. The city must be at least 50 times bigger than it was and I was never able to determine where the “old center” was. Probably, the buildings along those narrow roads have been bull-dozed to expand the width of the roads. There was certainly nothing nostalgic about my visit there. I spent a day and a half riding on the back of a motorcycle touring the area, occasionally stopping along the roadside to take some photos or video. Highlights of what I saw are in this video…

The lake in the video must not be more than 5 miles from where I lived in 1969 but I never even knew it was there. On the outskirts of town are large fields of coffee, tea, and rice: when I was there I never saw any of them. It strikes me how little I really saw of the Pleiku area in the year I lived there: how little I learned about Vietnamese culture. With the eradication of all the U.S. military facilities, there is really nothing that triggers any nostalgia. The place and the time where my memories were created are both gone now. But I know they happened. And I have some good Pleiku Army buddies I’ve stayed in touch with. We can share our memories with each other.