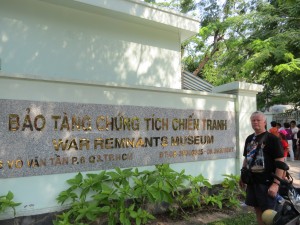 I’m sure there is no such thing as an unbiased war museum. That said, the “War Remnants Museum” in Ho Chi Minh city seems to be especially biased against the USA. It is impossible to know whether this bias is intentional (in the way the Chinese government uses the “NanJing Massacre Museum” to unify people by fanning the flames of anti-Japan sentiment) or simply reflects the truth as seen from the North Vietnamese communist’s perspective. Perhaps it’s a little of both. 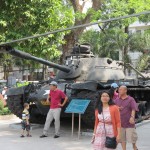 The museum presents a collection of U.S military artifacts ranging from airplanes, helicopters and tanks to machine guns, fragments of bombs and downed planes. In addition there are scathing indictments of the abuses committed by the US military. These include photos of GI’s torturing prisoners, photos from the massacre at My Lai, and documents describing the massacre
involving former Senator Bob Kerry and the horrific human toll of birth defects
caused by the U.S’s use of poisonous defoliants such as Agent Orange. 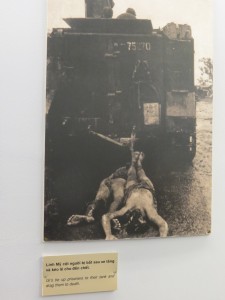 Caption: “GIs tie prisoners to their tank and drag them to death” – sadly, probably authentic. 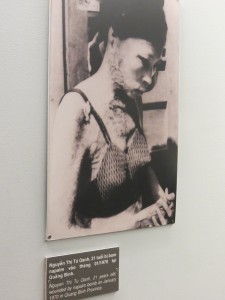 As difficult as these photos are to look at, I believe they, for the most part, depict real incidents of horrific cruelty commited by our troops and they make me very sad. Of course, it would be easy to cite even more horrific instances of cruelty committed by the communists: against both military and civilian people. In fact, all wars have incidents of excessive cruelty. It’s very tempting to “explain” such incidents as the acts of men without a moral compass. That is probably partially true but it’s also true that war can lead just about any of us to do things we will regret for the rest of their lives. 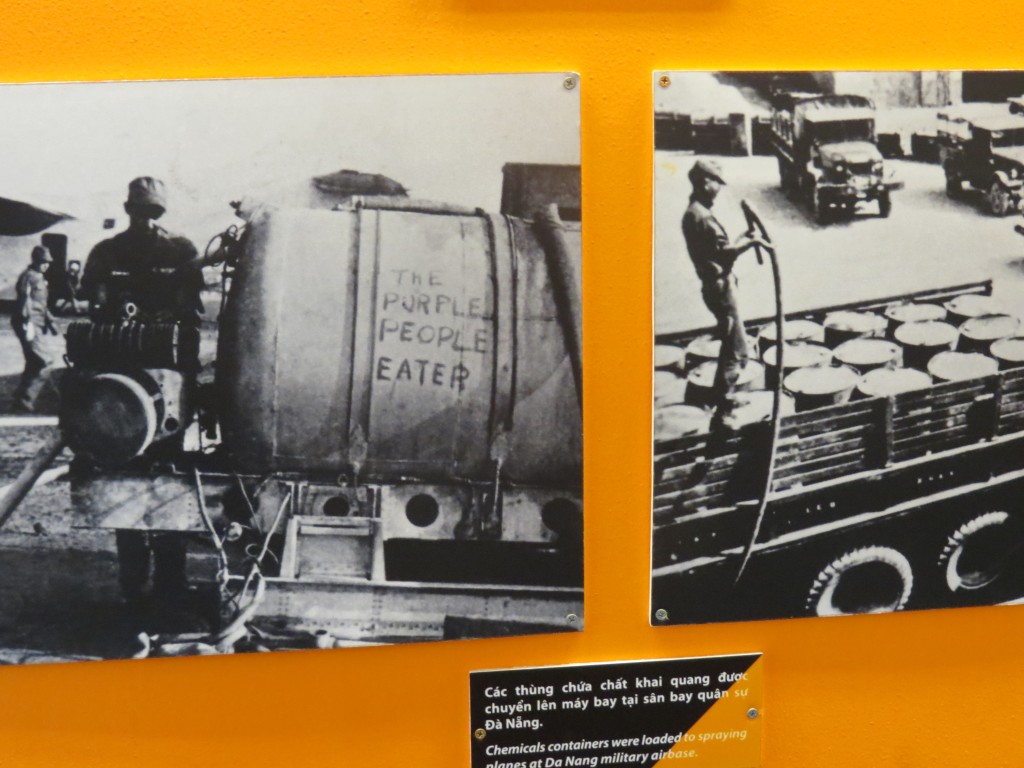 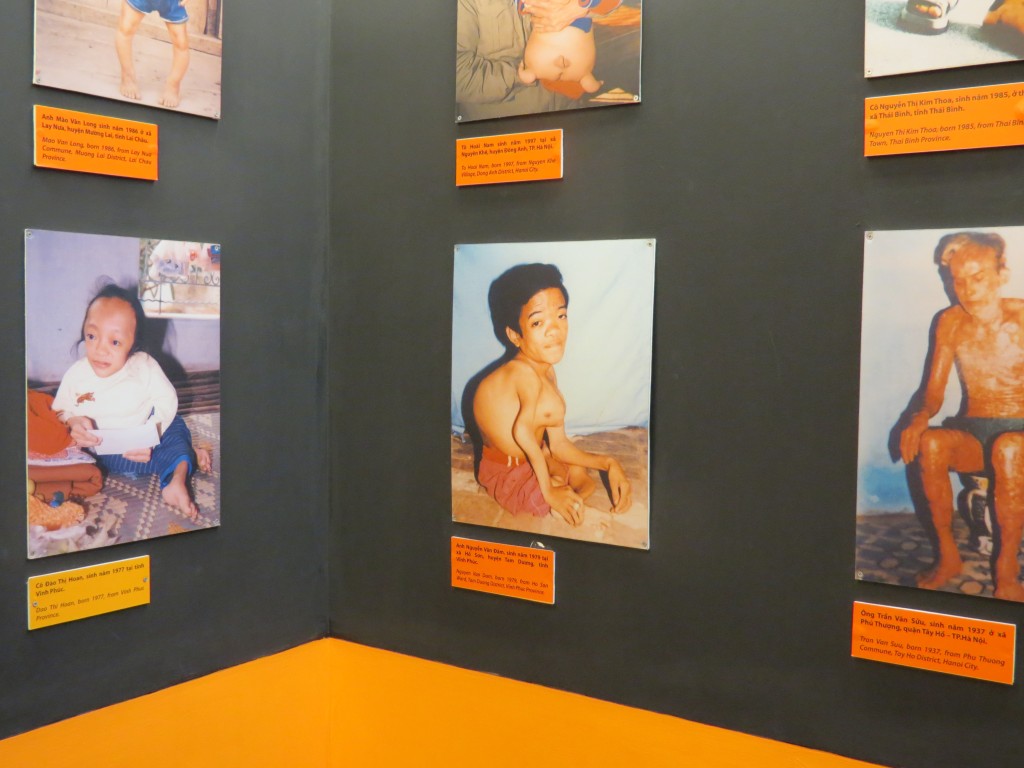 My initial reaction to the story told by the museum was anger. The perspective that the whole war was simply a “U.S. Aggression” is not true. Yet, if you look at Vietnam’s history since the end of WWII, you can understand why they may see it that way.

When I planned to go back to Vietnam, I did some reading and learned a lot more about the war than I ever knew when I was there as a soldier. It’s complicated and not easy to simplify but this is my attempt to do so. From 1946 to 1954, the war was between Ho Chi Minh’s “Viet Minh” nationalists and the French colonial government. The French had ruled Vietnam since the latter part of the 19th century. After World War II, global anti-colonialism sentiment was strong. The British recognized that they could no longer hold onto their “colonies” and worked with them to find paths to independence. The French, however, refused to let go of their territories in Southeast Asia. The conflict this triggered in Vietnam is sometimes called “The First IndoChina War” and ended when the French were convincingly defeated by the Viet Minh at Dien Bien Phu in 1954.

As the French withdrew, the Geneva Accords of 1954 divided Vietnam at the 17th parallel, “pending unification on the basis of internationally supervised free elections.” to occur two years later. Control of the north was given to the Viet Minh under Ho Chi Minh, and the departing French handed control of the south to Emperor Bao Dai, the titular imperial leader of a large section of southern Vietnam known as Annan. The U.S. representative at the Geneva Accords let it be known that the U.S. did not concur with their recommendation and had no intention of supporting it.

Bao Dai was quickly deposed by his prime minister, Ngô Đình Diệm and the Republic of Vietnam was created. Diem was a Roman Catholic who had been educated in the west. He had strong anti-communist views which helped him garner support from the United States. Instead of adhering to the Geneva Accords call for nation-wide elections to decide the direction unification would take, in 1955, Diem engineered a fraudulent election in the south and, with the help of the U.S., started building a right-wing dictatorship. Of course, Ho Chi Minh’s Viet Minh party saw the US-backed Diem government’s refusal to submit to the directive of the Geneva Accords as a betrayal and a communist insurgency in the south ensued, marking the start of the “Second Indochina War.”

Diem was a ruthless ruler who locked up anyone who threatened his control. From the beginning, the U.S government found him extremely hard to deal with (he was not a puppet of the U.S. – he was making all the decisions) but they continued to support his totalitarian regime, hoping they could bring him around to a more democratic mode of operation and believing that any regime friendly to the U.S. would be better than a communist state. Diem’s lack of support from the people and his distrust of any military commanders not from his own area of Vietnam led to a very ineffective prosecution of the war. US military advisors were extremely frustrated that the insurgency was allowed to grow as the South Vietnam army seemed unwilling to engage them, owing partly to the fact that any commander with a high casualty count would be dismissed by Diem. (For a great read, see “The Making of a Quagmire” by David Halberstram.) Diem’s policies toward the ethnic minorities (the “Montagnard People”) and the Buddhist majority led to strong protests. In 1963, the first “immolation” (self-burning) of a Buddhist priest sparked strong anti-Diem feelings in the country. Shortly after that the US government either helped or implicitly supported his assassination.

Most of us know the story from there: the U.S. military and state department continued to advise U.S. presidents that the end of the war was in sight; that more ordinance, more troops, or more bombing would assure victory for the south. By 1968 we were carrying the bulk of the fighting. We were winning most of the battles except for the most important one, the support of the people – in Vietnam and in the United States. We faced the dilemma of whether to pull out and admit the endeavor had failed (and that so many of us had died in a futile war) or to continue to look for military solutions. While U.S. public support for the war was disappearing, President Nixon stepped up the bombing of the north and invaded parts of Cambodia and Laos in a desparate attempt to turn the tide of the war. It became apparent that superior technology and weaponry cannot force a determined people to submit to our will.

What really makes me sad is that most of us who participated in the war in Vietnam believed we were invited there by the people of South Vietnam to help them combat a regime that wanted to force a communist government on them. We went there to help them have a chance at a government other than communism. Fifty-eight thousand American citizens gave their lives and hundreds of thousands more their physical and mental health to help this small country have a chance at self-government. Yes, the U.S. government made many mistakes along the way (and we need to try to learn from those mistakes) but I believe our intentions were fundamentally good, even noble. Unlike the French before us, we didn’t want to create a new “colony” – our intent was to take a stand against the spread of a form of government in which the people do not have a say.

I feel so sad for the country of Vietnam, which has endured such a long and painful war. They have suffered enough. Even though I do not support their form of government I feel so happy to walk around the streets of Saigon and Pleiku without seeing military vehicles and personnel everywhere you look. I hope Vietnam continues to prosper and that the wounds that separate our countries can slowly heal. And, I hope they can steer their government toward ever-more open and democratic policies.

But I am not sorry that I participated in the Vietnam war. I am proud that I was part of group of people who risked their lives to help people we didn’t even know. I am proud to be an American