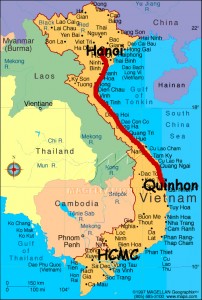 Route of train from QhiNhon to Hanoi

From Dieu Tri (just outside QhiNhon) I caught the “Reunification Train” to Hanoi at 9am on Friday morning. It wouldn’t arrive in Hanoi until 4:30am Saturday morning and I wasn’t too excited about the prospect of another long train ride – the 21-hour Thai train ride had seemed interminable. But, I had already purchased the ticket and it was cheaper than flying so I steeled myself for the journey. I was happily surprised to find that my accomodations were comfortable, the views from the windows often spectacular, and the train arrived in Hanoi only 30 minutes late (the Thai train had been 5 hours late!)

My cabin had four berths (seats/beds), and I had purchased one of the two lower berths. Lower berths make it easy to sit during the day and use the little table under the window for eating. The people in the upper berths basically just layed down for the whole journey and couldn’t see much. Between Dieu Tri and Hue, I shared the cabin with a lady who spoke no English so our conversation was extremely limited. She mostly slept and I mostly watched the countryside roll by. The scenery just north of Dieu Tri consisted primarily of fields of rice and vegetables with occasional banana trees. It struck me how many people here are still working the land by hand. I saw a couple of people tilling the land with oxen-drawn plows but most were hunched over planting, weeding, etc. I figure there must be a lot of tired/sore backs every night here.

Having seen only a portion of the southern half of the country in 1969, it was exciting to be going north where everything would be new to me. I didn’t notice much change until we got to Danang where we made a 20 minute stop. North of there, the train hugged the side of the mountains along the coast and the views of the ocean and rocky shores were beautiful. I didn’t realize it immediately but the countryside was gradually becoming greener as we went north. It was dark by 6pm so I listened to the book-on-tape Grace had sent via Michael and dozed. But, the occasional comings and goings of people in my cabin kept me awake until quite late. About 4:30am, I awoke and thought we must be getting close to Hanoi. I could see it had been raining outside which surprised me. Until this time, all the weather I had experienced in Vietnam had been warm/hot and dry.

As the train pulled into Hanoi about 5AM, I gathered my things and got off. It was surprisingly cool and a light rain was falling. Over the next few days I would learn that the weather in Hanoi is very different than the weather in the southern part of the country. I waved off the many taxi drivers meeting the train and followed my map to my hostel which was only about a 20-minute walk from the station. When I got there, the door was locked and I peeked into the lobby through the glass door. A young man who had been sleeping on the floor of the lobby got up and came to let me in. I was delighted to learn that my room was ready even though I was about 8 hours too early for regular check-in. The only downside: it was on the 6th floor and there was no elevator. Oh well, this wasn’t the first time I had to drag my bags up several flights of stairs. I have learned that it’s only going up on the first day that is bad and you just take your time and rest on the way up. When I got to the room it was still dark outside and very conducive to another couple of hours of sleep before starting to explore the capital of Vietnam.

3 comments on “Train to Hanoi”