Bangkok has one airport primarily for domestic flights – Don Meuang International – and that’s where I am now sitting in a Burger King two hours ahead of my afternoon flight to Chiang Mai. I never eat at BK at home but, when you’re on the move and every new meal can be an adventure, a little taste of home is welcome. I think when I get to my teaching assignment in rural, eastern Thailand next week, I won’t have this kind of option.

As I said in the previous post, the hostel was great. After trying to figure out the best (cheapest/fastest) way to get to the airport from the hostel, I finally decided to just pay for a taxi. It turned out to be an interesting ride because the protestors still have many major intersections in the city blocked. My taxi driver had to change her route several times, on one occasion she even drove through what seemed like a parking lot to get around the blocked intersection. Eventually, she found the freeway and we were off… the airport is about 30 minutes north of the city.

The fare was 217 baht (about $7) – I probably could have gotten here for $1 if I had been able to negotiate the public transport system and been willing to drag my suitcase up/down occasional stairs. I think $7 was a good deal. I gave her a big tip and she was very thankful, giving me her phone number to use when I return. I’ll be back here in 5 days and need to go from the airport to a special bus station to catch a bus to my school so I will probably give her a call.

It was interesting to see the protest areas. There were not so many people but they had effectively set up barriers and stages for making speeches with sophisticated PA systems including large-screen TVs to simulcast the speakers. Police staffed these areas but mainly to help steer the traffic away. We also passed some official looking buildings that had barbed wire around their perimeters and soldiers carrying rifles at the ready. I didn’t get the impression of any tension at that moment but it was very early in the day. The photo below comes from the English newspaper in Bangkok and you can see the size of some of the roads being blocked… 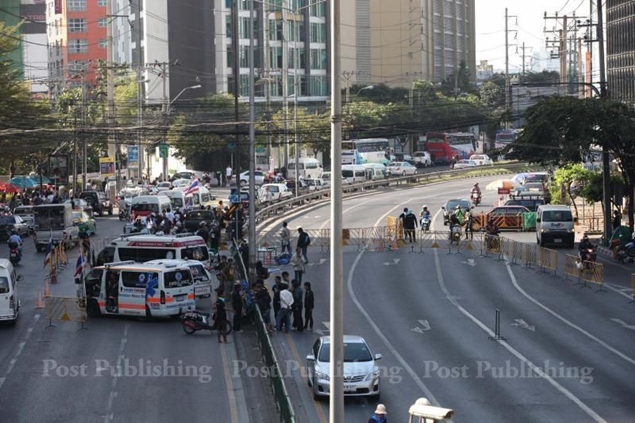 This airport is very modern and user-friendly. The check-in and security checkpoint processes were efficient and there are plenty of English-proficient staff around to help you. 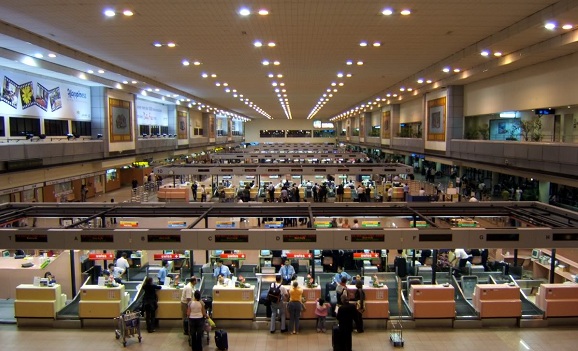 I bought a new SIM card for my IPhone at a convenience store here. Since the company’s network is based here in Bangkok, I should be able to use it the next 6 weeks or so while I’m still in Thailand, hopefully without significant roaming charges. So now I have 3 SIM cards, Verizon and Singapore Telephone in my wallet and a DTAC (Thai company) card in my phone. I haven’t tried a local call yet but I called Grace successfully just after getting the new SIM.

I look forward to visiting Chiang Mai. I have the impression that it is a very interesting area and I know there are many westerners there (a mixed blessing, really: sometimes too many westerners can mean locals who are tired of them!) Tomorrow I have scheduled an all-day visit to the Patara Elephant Farm. I’m looking forward to that!