As I mentioned earlier, having a cold forced me to cancel my plans to scuba dive here on Koh Lipe. A bit disappointing, especially since my bungalow is part of a dive outfit named Adang Sea Divers. But, as I told Grace, I have mixed feelings about it. Perhaps I’ve reached an age where the hassle and safety concerns about scuba diving outweigh the benefits.

Tonight is the last of my four nights here. The first day I arrived I went out snorkeling right here on the beach and it was great. Unfortunately, my cold got worse and I spent the next two full days just lounging in my room or sitting on the beach. After two days rest, I took the chance and booked a full-day snorkeling trip for today (Thursday). I figured that even if I found I was still too sick to get in the water it would be fun to get off Koh Lipe and see some of the other islands in this area (there are hundreds of small uninhabited islands around here.)

I was so happy to wake up this morning feeling better than I have in 5 days so I made the trip and it was spectacular. Eight of us left Koh Lipe in a “long-tail” boat captained by a young, powerfully-built, non-English-speaking local boy at 9am. During the day we enjoyed snorkeling at 5 different reef areas, had a nice lunch on a white sandy beach populated by millions of tiny hermit crabs, threw bananas to wild monkeys who came to the beach to beg, and saw an incredible number of different kinds of sea life. I found this video of a clownfish on Youtube – we saw many of these little guys flitting in and out of the waving arms of the anemone. 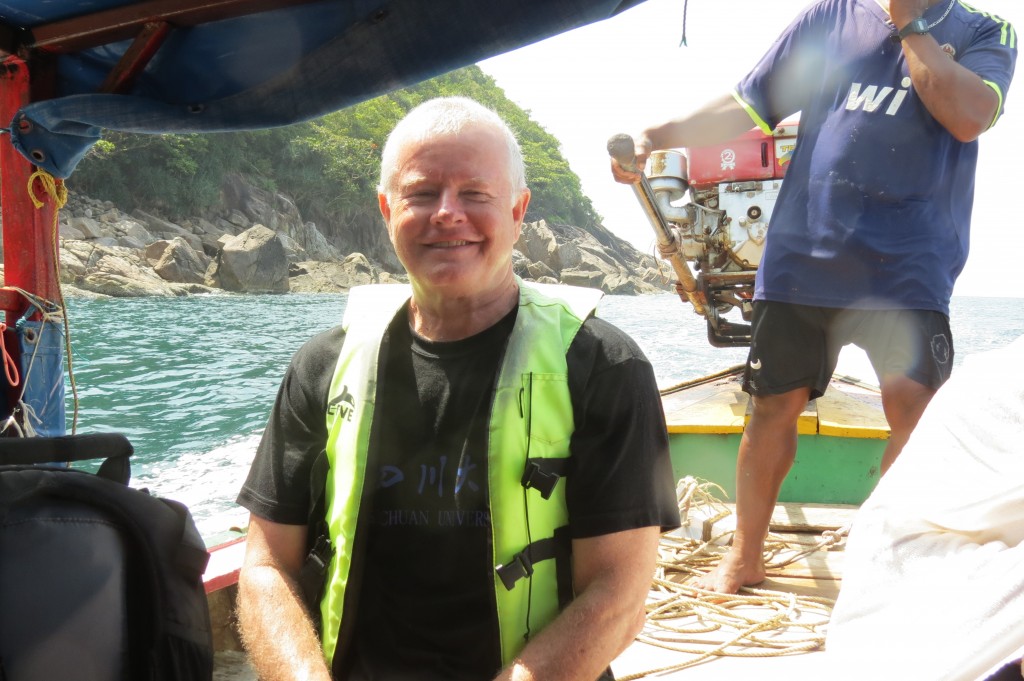 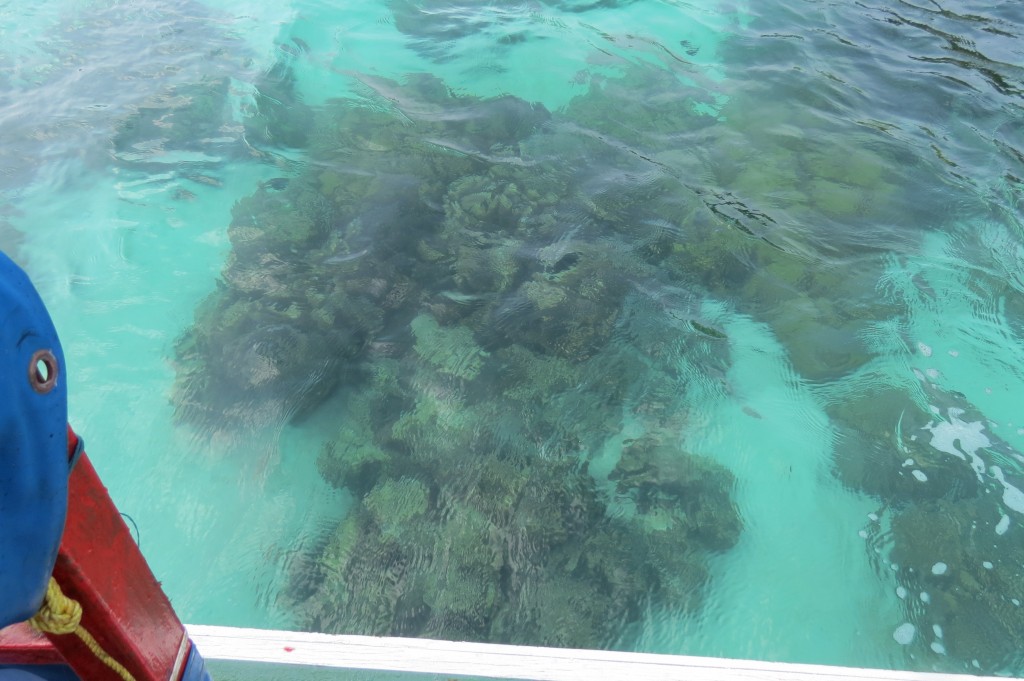 Clear water shows reef even without a mask! 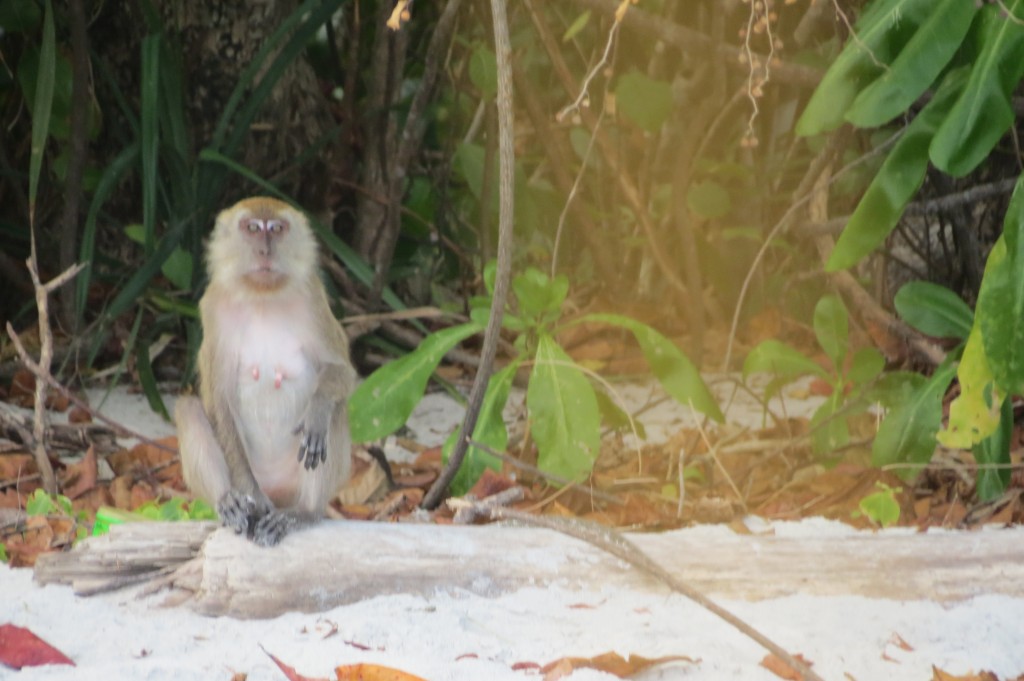 Wild Monkey Awaits a Treat from the Tourists 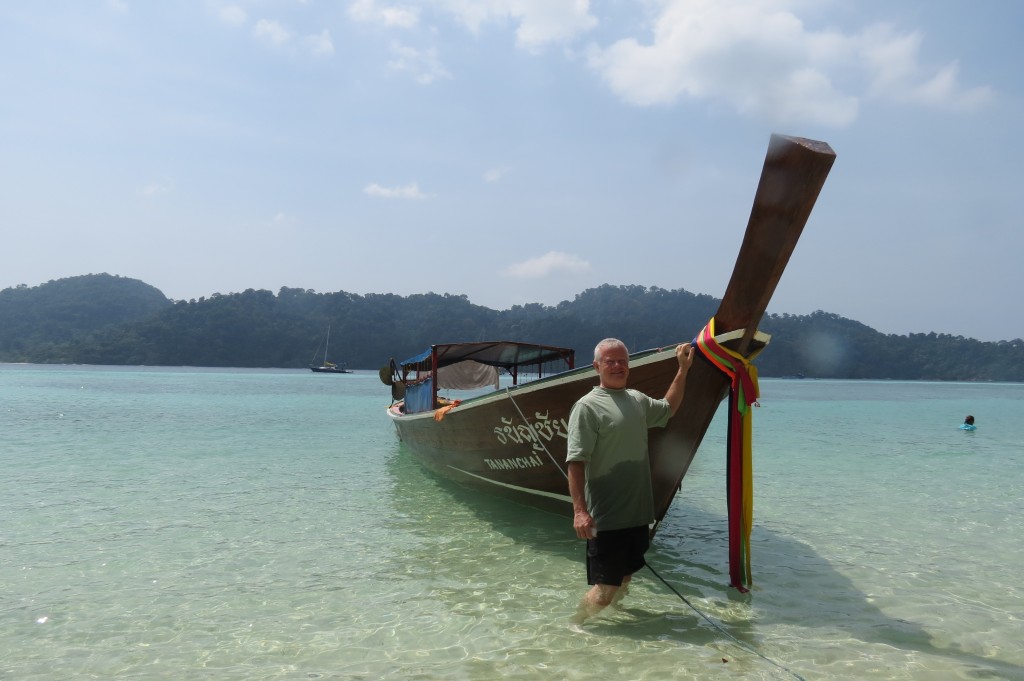 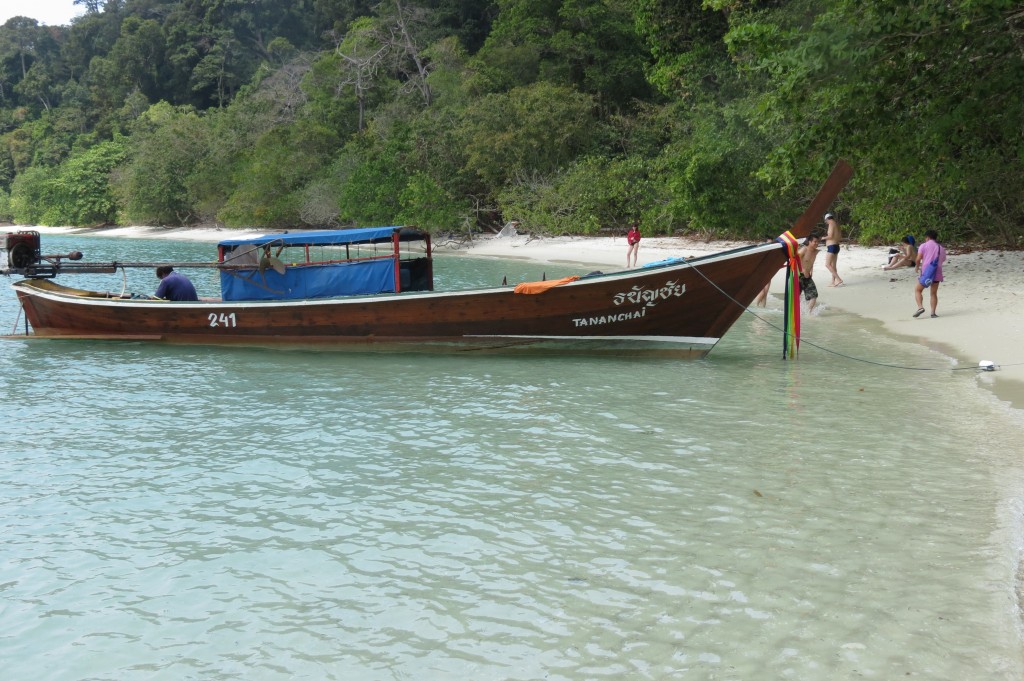 Beach Where We Shared Lunch with Hundreds of Small Hermit Crabs

Here is a short video I took of my companion snorkelers. It’s low quality in order to make it small enough for uploading using slow WIFI. If you want an idea of what it’s like below the water there are some pretty good videos on YouTube – just search for “Koh Lipe Snorkeling.”

Finally, here’s a video of the wonderful little hermit crabs who inhabit the beach where we stopped for lunch.

I’m pretty tired tonight though I don’t think I have exhausted myself to the point of getting sick again. All the “riding” the waves in the boat did cause my lower back pain to reappear: not badly though, a couple of Advil and I feel fine.

I leave the island early tomorrow. I’ll walk to a different beach, catch a long-tail taxi to the floating dock in the harbor, catch the speed-boat back to Pak Bara and then a mini-van back to Hat Yai. I should arrive in Hat Yai about 1:30 in the afternoon. I have a ticket for a train leaving Hat Yai at 6:30pm and arriving the next morning in Bangkok. I’m hoping that the demonstrations do not force cancellation of this train. I have done some thinking about a backup plan which would be to stay in Hat Yai two more days then fly to Bangkok the same morning as my afternoon flight from Bangkok to Chiang Mai. This being your own tourguide in exotic places sure forces you to stay on your toes and think ahead (not one of my strengths :-).