New Friends on the Train to Penang

Late last night I arrived in Georgetown, Penang in northern Malaysia. This is a former British colony stronghold so it has some great old buildings but the general condition of things is a bit seedy, in my opinion. But I really need some “down time” anyway, so I’m happy to rest in a nice air-conditioned dorm room with reasonable WiFi for a couple of days. Tomorrow afternoon, I catch the train north and will be in Hat Yai, Thailand by tomorrow evening.

Just after being seated on the train yesterday, as we prepared to leave Kuala Lumpur, a nice Malaysian man took his seat beside me and gave me a pleasant “Good Evening.” In short order it became evident that he was very excited about having the chance to meet and talk with a native English speaker as he is very keen to improve his English. Within the next hour or so, I learned that his name is Mohammed Yusar bin Zaini (I could call him Yusar); he is in the Malaysian army and has been for 23 years; he has a wife and five children (all girls) in his hometown of DaiBing, and he is trying very hard to improve his English. He actually tried to talk me into coming home with him and staying with them instead of visiting Georgetown! (In hindsight, it would probably have been more interesting than Georgetown but it also probably would have been exhausting – I would have been tutoring him and his five daughters every minute I was there 🙂

Yusar wanted a photo of the two of us so he walked back toward the rear of our train car to ask his friend to come and take the photo. In this way, I met his friend Habib, another middle-age Malaysian man who is in the Army. Habib was a little more tentative in meeting me but, nonetheless, very friendly. About 2 hours into our journey, they invited me to the dining car for coffee and Yusar insisted on paying. He kept telling me how happy he was to meet me and that I should definitely come back to visit his home whenever I could. I took the photo below of the two of them as we enjoyed our coffee. 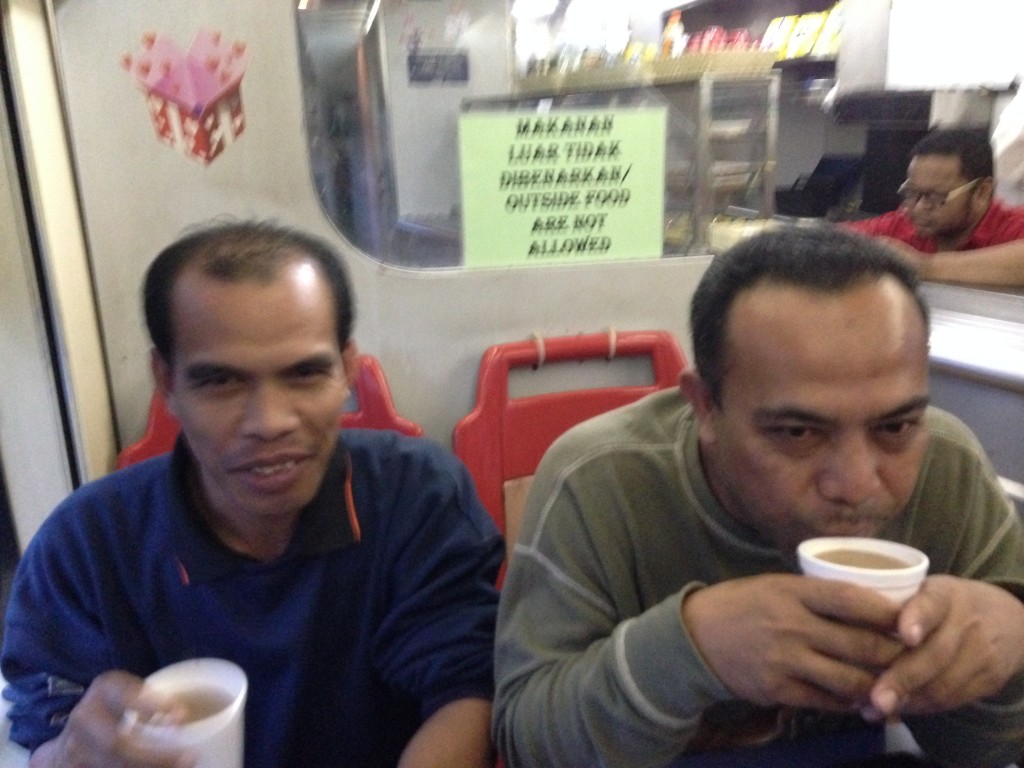 Now, I am a little tired from all the traveling I’ve been doing so I probably wasn’t as receptive to this little encounter as I would have been if I felt more energetic. At first, I wasn’t that responsive to Yusar’s pleas to get to know more about each other but his earnestness and charming way won me over. It’s these little encounters that make this kind of a trip special: when you make a personal connection with people from such a different walk of life you feel there is hope for humanity; that if we could only sit and have coffee together and talk about our families, jobs, etc. that we wouldn’t need to be so afraid of each other.

While most of our conversation was in English (both of them could speak well enough to communicate), some of the dialog between them was, naturally, in their own language, Malay. I wouldn’t know how to describe this language so I took a short video so you could hear it. Click play to watch the video below…

Now that you have heard it, let me translate the Malay to English for you: YUSAR: “Do you think he trusts us yet, Habib?” HABIB: “Not sure, we may need to keep schmoozing him for a while.” YUSAR: “Yeah, you’re probably right, I’ll ask him about his family again.” HABIB: “Do you want his wallet? I’ll take the passport…”

I realize that my “translation” is insulting and not at all in the spirit I expressed a few minutes ago: that we need to trust each other. I certainly don’t mean to suggest that because they were Muslim I thought it more likely they had nefarious intentions. They were/are very clearly good, honest men. I offer the phony dialog just in fun, really poking fun at myself by admitting that a small part of me felt a little uncomfortable sitting at a table with two Muslim men I had known for less than 2 hours speaking what sounded (to me, anyway) a little like Arabic.