On the second day of our stay in Siem Reap, we toured two more temples, one quite distant from the others. We rose early to visit Ta Phrom, also known as “The Tomb Raider” Temple owing to its use in the “Lara Croft” movies. It’s the temple that was found later and was completely overgrown with jungle trees/vines. The incursion of the jungle is almost as interesting as the ancient carvings and inscriptions in the temple so the park authorities have left the trees. When a tree threatens to do serious damage to the temple, however, it can be cut or at least seriously trimmed back. It was about 7am when we arrived, before the throngs of tour buses which destroy the ambiance of the jungle sounds. Some photos… 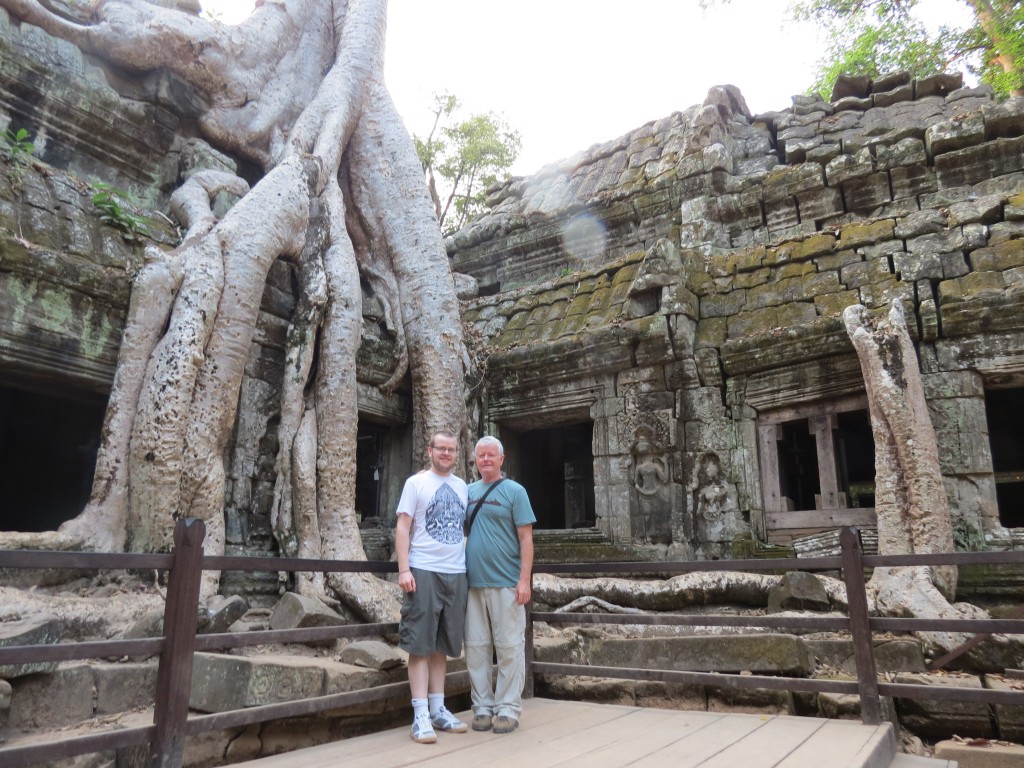 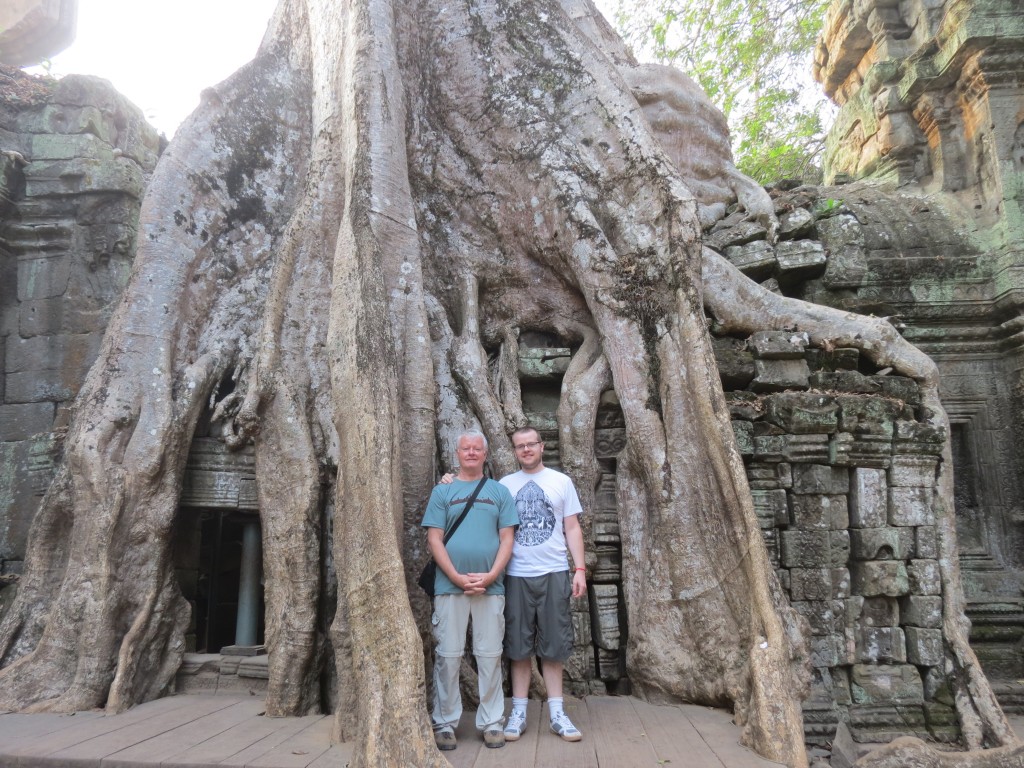 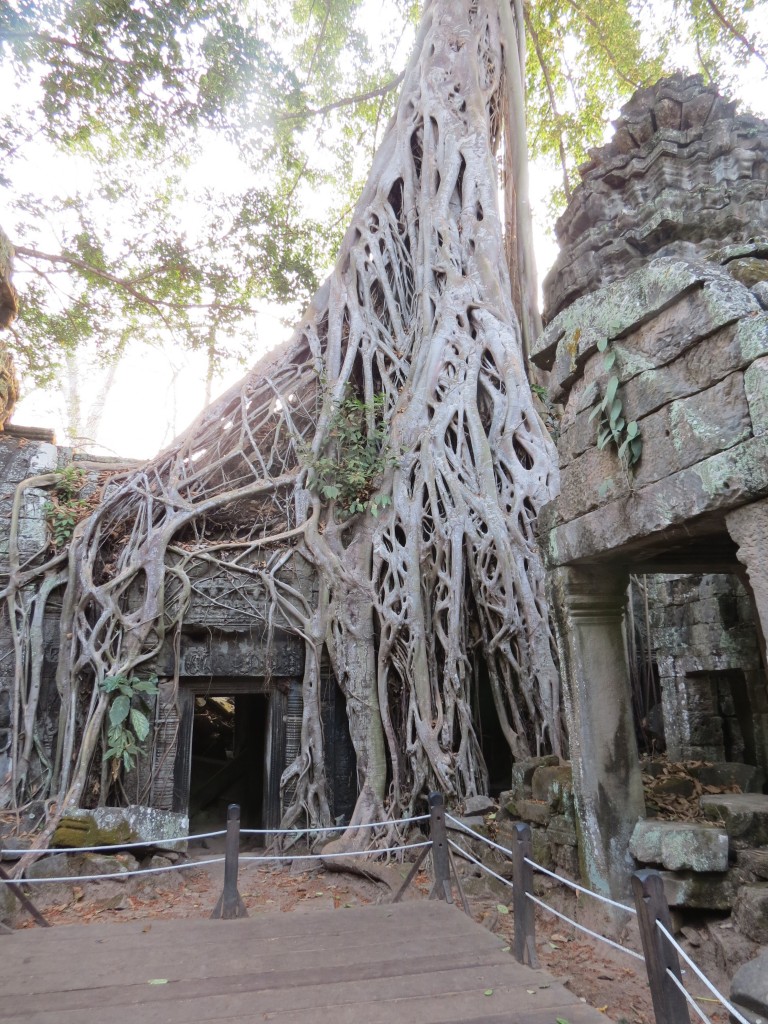 After Ta Phrom, we traveled about 20 miles to one of the most distant temples, Banta Srei, known for its exquisite carvings:. A couple of photos from our visit… 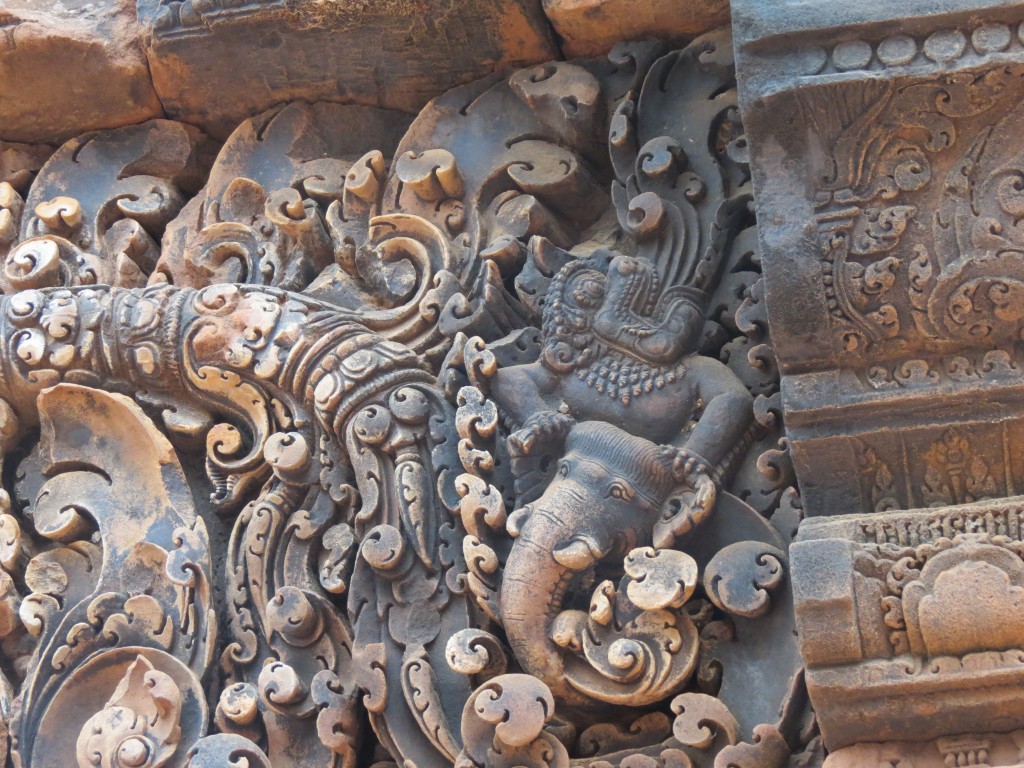 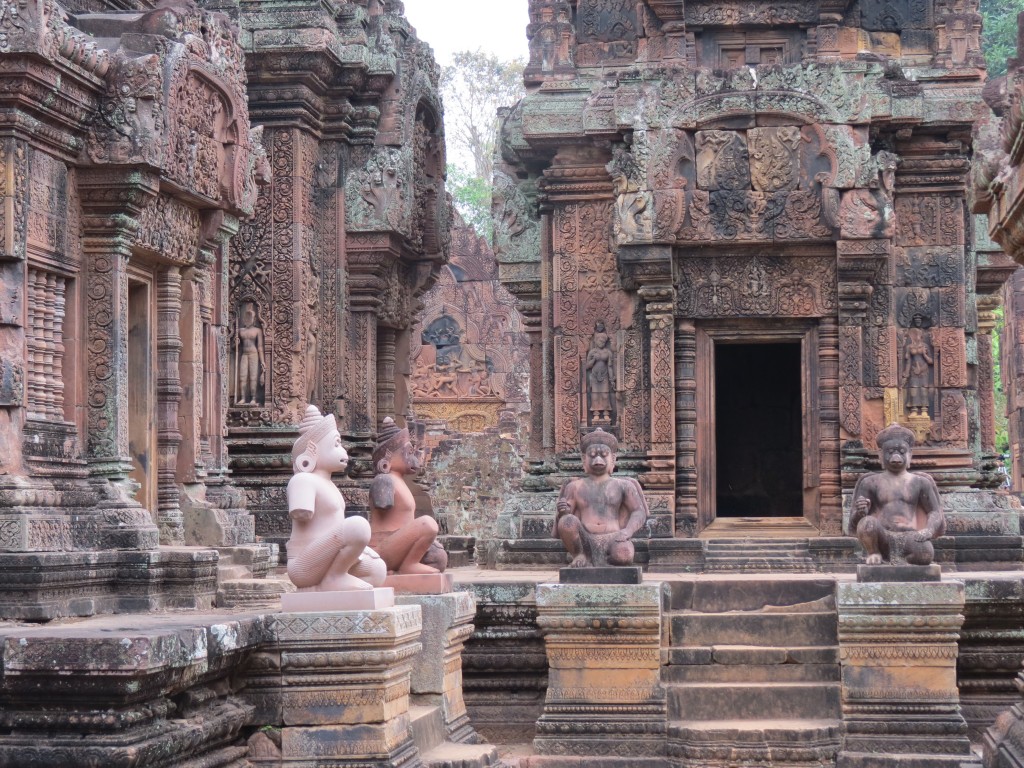 The Small but Exquisite Temple at Banta Srei

Our guide Tea and his wife Tevi, took us back to our hotel room about 10:30 so we could rest after such an early start. At 2pm we were picked up again and we enjoyed a visit to the huge lake south of Siem Reap, Tonle Sap Lake. This natural lake swells to more than twice its dry-season size during the rainy season. It’s home to several “floating villages.” The one we visited is inhabited by Vietnamese families: they live on the water, moving to the ‘flooded forest’ during the high water. Unfortunately, they are not very concerned about what happens with their trash and plastic bags are everywhere on the shore (and high in the trees from when the lake was much higher.) A couple of photos and a video of the event are below. 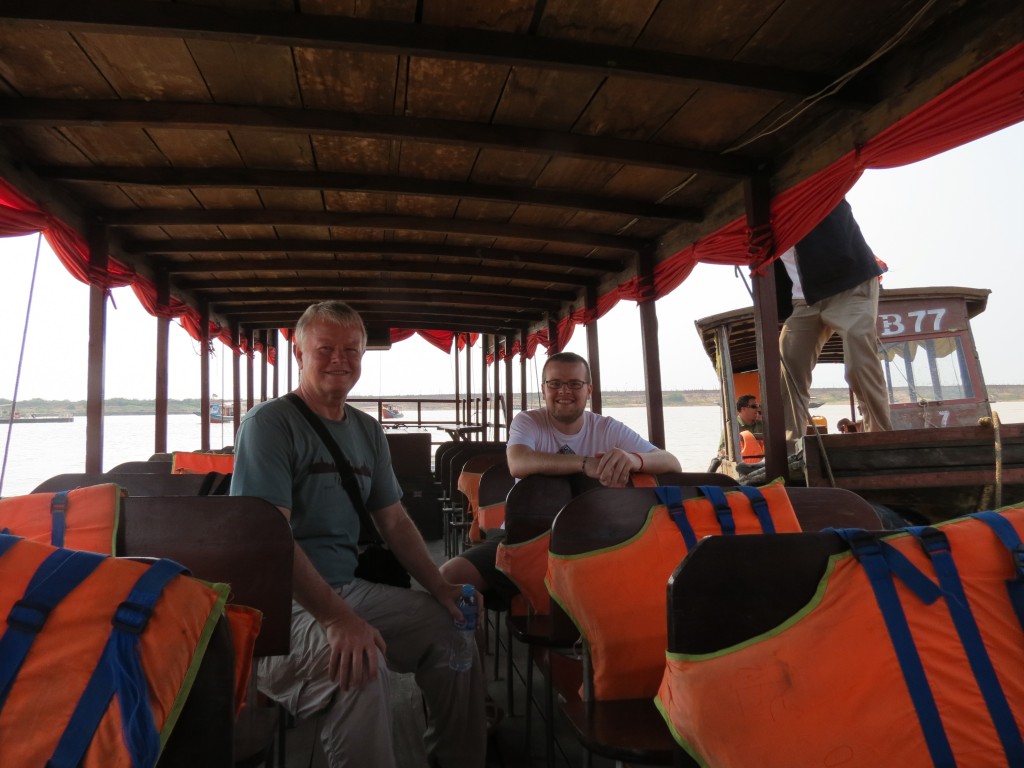 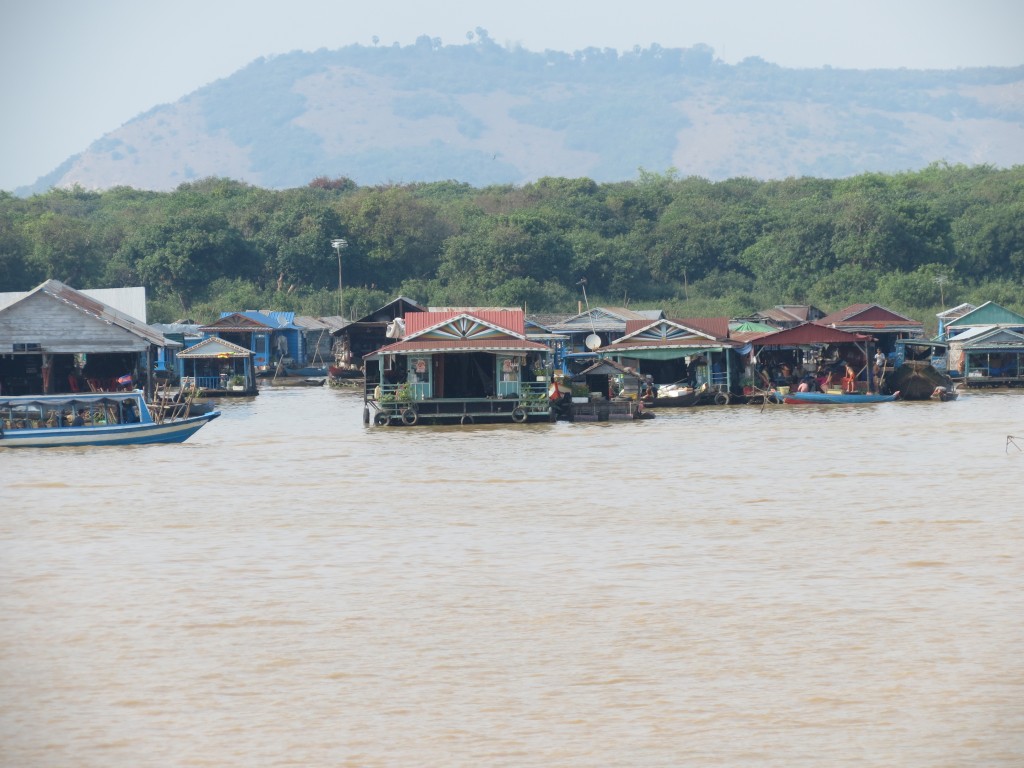 The final event of our two-day tour was a ride on an oxen-pulled cart through the farm fields south of Siem Reap. We weren’t very comfortablly seated and were happy when it was over but the view of the farms and families we passed was very nice… 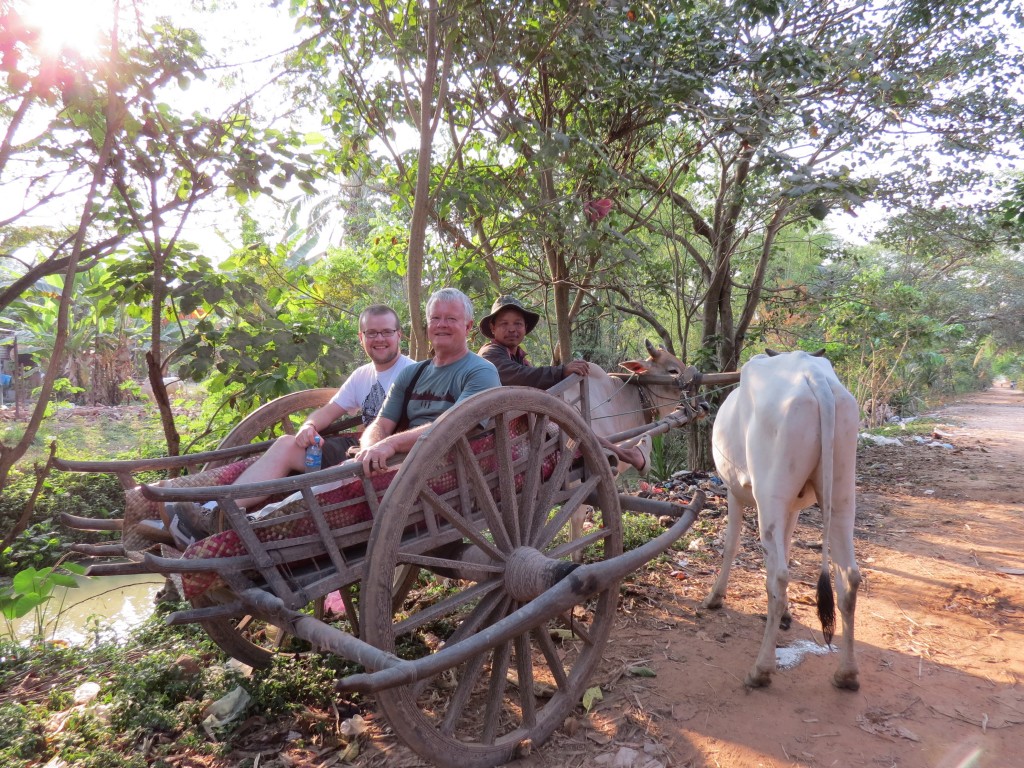 Seated for our Oxen Cart Ride

Video: Ride in an Oxen-pulled Cart

I’m writing this sitting in our hotel room in Saigon. We arrived late last night after an extremely long bus ride from Siem Reap. We visited the “war museum” today and I’ll have more to say about that later. Michael seems to have a bit of a bug and we’ve decided to have him start a Cipro regimen. We hope he feels better by tomorrow morning as we have an all-day tour of the Mekong delta area.