The hostel I’m staying in this weekend is called Casa Ana and it was recommended to me by my volunteer organization in Trujillo. It’s a nice place, very simple, spartan rooms, shared bathrooms and a minimal free breakfast. They advertise themselves as a “backpacker’s hostel” and they’re in a nice middle-class neighborhood which has been very interesting. Ana is Peruvian and her partner, Hein, is Dutch. Ana doesn’t speak much English but Hein’s English is nearly perfect. I have enjoyed chatting with Hein and learning about his interesting life (74 years so far) which included a career with IBM in Holland, teaching in Liberia and Paris, and managing a software group in Mexico. For the past 15 years he has been spending May-Sept in Holland and Oct-April in Lima (summer, here.) He also shared some of his boyhood memories of German-occupied Holland. He and Ana are both very nice and meeting them reminded me of one of the fringe benefits of foreign volunteering, where you go places you might not go on a “real” vacation, you live in low-budget accommodations where you meet your fellow travelers and hosts, and you get a much greater feel for the local culture and way of life.

Casa Ana has two storeys and about 4 guest rooms which can hold up to 12 guests. A nice feature is the rooftop patio where I sit now. The days have been pretty hot (about 85-90) but it cools off nicely at night and it’s very pleasant out here in the cool evening air. The house has a courtyard in the center, open to the sky. If it rains, it rains right into the main hallway on the first floor. If there is enough rain, they must push it out the front door with a broom. This is rare, however, because Lima is basically built on a desert, much like Los Angeles. In areas where people cannot afford to plant desert-hardy trees/shrubs, such as in the Shantytown I visited on Friday, the ground is dry and brown and the dust is very bad. 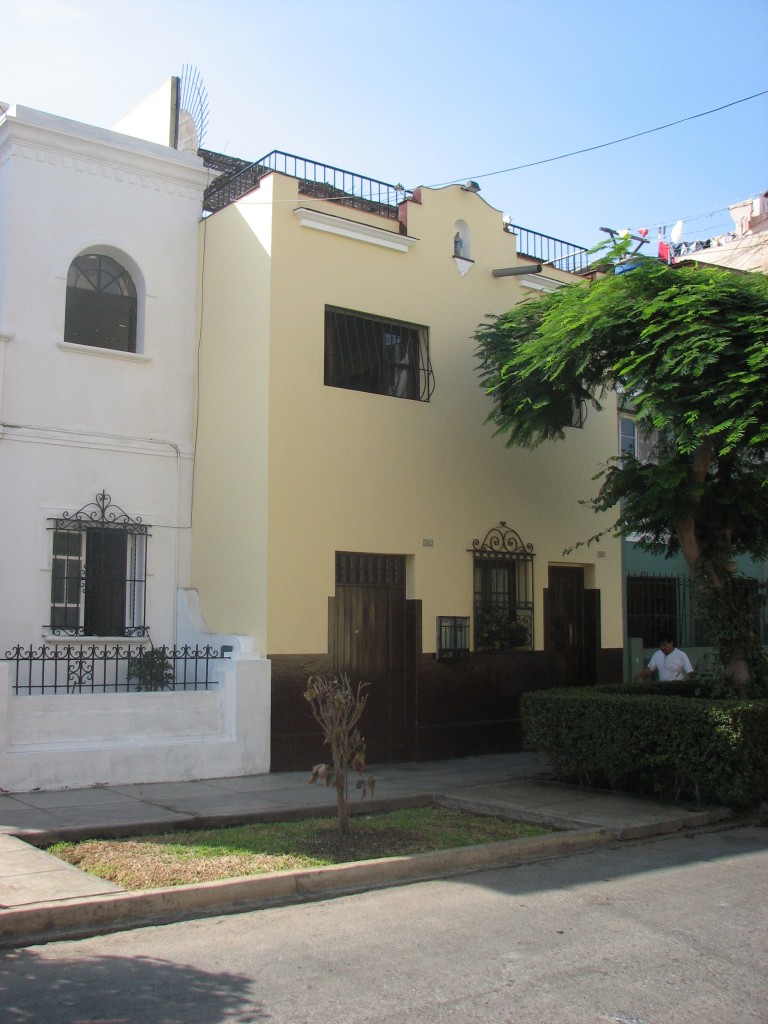 Saturday morning, I was again picked up at my hostel by Haku Tours. Edwin and Celia conducted another private tour, this time of the historic/interesting parts of central Lima. I seem to have arrived at the slowest time of the year for tourism, hence I’m getting the special attention of the head tour guide :-). During the morning, we visited the ancient (built in 1500s) Franciscan Monastery, founded by the monk who accompanied Pizarro when he created the Spanish colonial capital at Lima. Lima didn’t really exist until the Spanish arrived: the mountain town of Cuzco was the long-time capital of the Inca Empire. But the Spanish wanted a capital that was near a port, partly so they could easily ship home the gold and silver they looted. (The history of this area is long and tragic and I won’t (can’t) try to explain it here.) The Franciscan Monastery and church are quite beautiful and sit on top of a labyrinth of tunnels known as the Catacombs. Here the bodies of the privileged Spaniards were buried. Although they were originally interred in separate, private tombs, at one point an overzealous head monk decided they should all be dug up, sorted, and displayed in piles of like bones. So, you’ll see a large crypt of femur bones in one place, stacks of skulls in another. It’s pretty morbid but undeniably fascinating. Edwin says the Catacombs also served as escape routes and hiding areas during invasions: more than one of which was launched by the British throughout recent centuries.

An interesting aspect of the old churches in central Lima is the obvious Moorish influence on the architecture, which came from Spain. 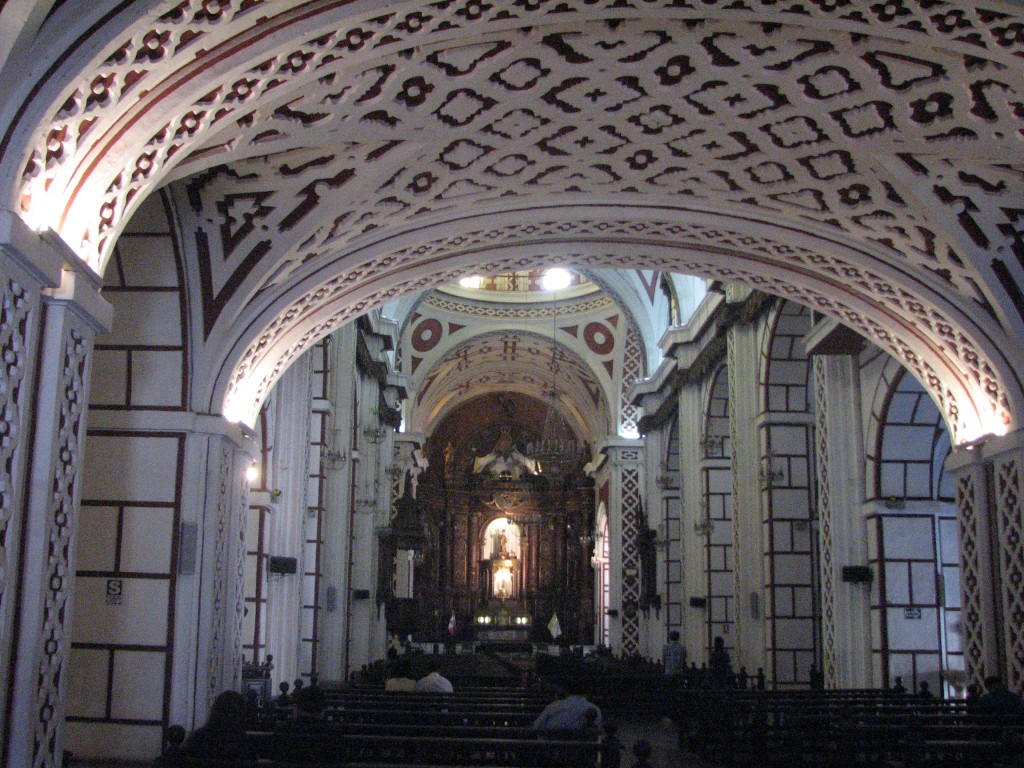 Later, we visited a gastronomic museum where Edwin used the displays to teach me a little about Peruvian cuisine. He explained it by describing Peru as three different countries within one – the flat, narrow coastal area (which is where the Spanish settled), the Andes where the Incas lived, and the jungles of the Amazon river basin. The cuisine and cultures of these areas are just as distinct as their geographic differences. I am beginning to see that the food in Peru is quite interesting and tasty. I’ve been trying to be careful about eating until my stomach adjusts to my new environment so I haven’t been very adventurous yet, but I have tried a couple of native dishes already and they were quite a treat. I’ll talk more about these in later posts.

A major stop on the tour was the central plaza – Plaza Mayor – which marks the center of Lima. I took the panoramic shot below near the center of the plaza. The bronze fountain in the center was built in 1650. Before that, the center was used as a public execution spot. To see the entire 360 degree view, right-click and drag on the photo.

The tour ended at the plaza and I said my goodbyes and thank-yous to Edwin and Celia. They were so helpful to me in my first 2 days here, giving me lots of advice, helping me with my Spanish and helping me get and install a SIM card for my cell phone. When they left, I took a leisurely 50 minute stroll back to the hostel, followed by an even more leisurely 3-hour nap. Late that afternoon, I walked to the bus station to buy a ticket to Trujillo for 9am Monday morning.

On Sunday, I spent some more time visiting the center of Lima. The walk from the hostel is only about 40 minutes but I took much longer, stopping to have a “coffee con leche” (latte?) and to get cash from an ATM. I took a 15-minute tour of the Dominican Monastery which was interesting although I think I have now reached my limit for visiting monasteries. 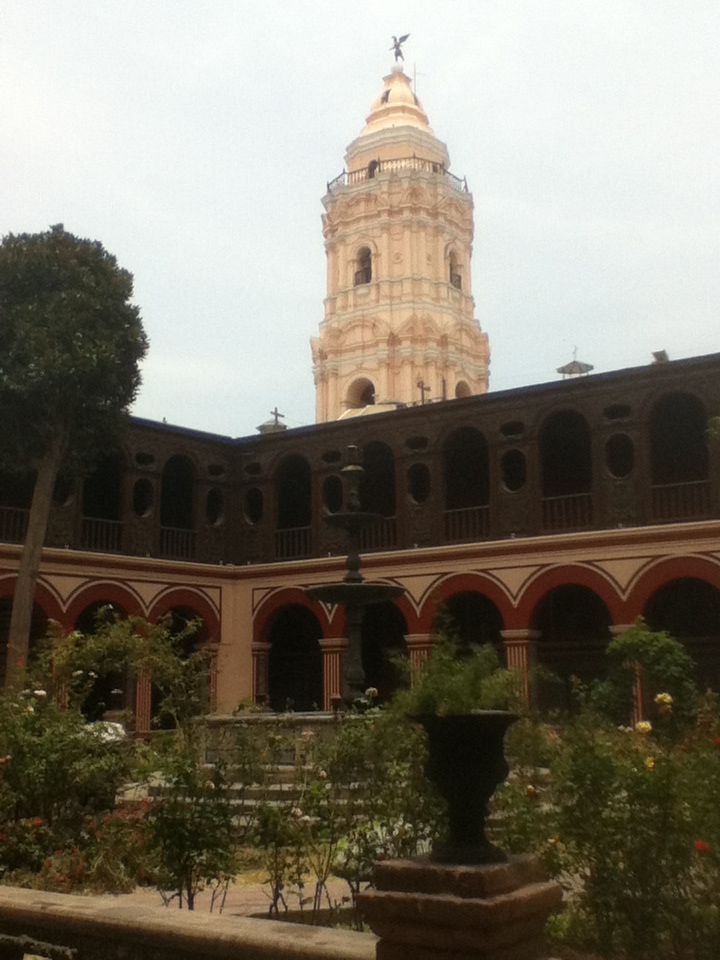 Dominican Monastery: View of Bell Tower from one of the Interior Courtyards

On my way home from town, I stopped and went to a movie, thinking a couple of hours resting in an air-conditioned theater would be a good way to kill some time. The young lady who sold me the ticket asked me if I realized it was in Spanish and I told her that I might not understand much but I’d give it a try. The movie was “Viaje 2: La Isla Misteriosa” (Journey 2: The Mysterious Island.) This movie stars “The Rock” and Michael Caine and is not very good. However, the lines were simple enough to help me figure out what the were saying so the whole thing was like a fun Spanish lesson. Actually, before I found this movie, I mistakenly sat down in the wrong theater and I watched the first 10 minutes of a horrific slasher movie called “Masacre Sangrienta” (an American movie actually called “Chromeskull: Laid to Rest 2”) – the violence was really awful. Only a handful of people were watching it but it worried me that anyone would find that stuff entertaining.

As I finish this post, I’m ready to take a shower and get to bed early so I can be ready to head to the bus station at 8:00am. Ana and Hein will hail the taxi for me and get the driver to quote the price before leaving. At 9:00 I’m off to Trujillo. I look forward to seeing the view along the coast and to arriving at my volunteer assignment.

2 Responses to Weekend in Lima