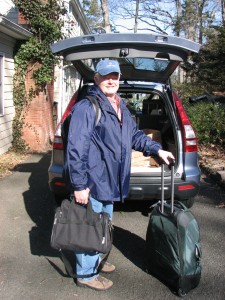 On Thursday morning, after a restless night’s sleep, Grace took me to the airport to begin my journey.  The photo taken before leaving home seems to demonstrate my efforts at lean packing were not totally successful.  Oh well, it seemed like everything I packed was needed.

The 11.5 hour flight to Lima (thru Houston) was tiring but tolerable. I was pretty exhausted but going through customs and baggage claim went smoothly. Upon exiting customs, a sea of people were awaiting outside including a large number of taxi/limo drivers holding signs with their client’s name. I finally spotted a “J Millsta” sign and met the man who helped me get my bag to his taxi. Raul and I chatted on the 20 minute trip to my hotel and I learned that we were going from the Callao district (airport) to Brena where the hotel was. Since he didn’t speak English, it was pretty cool to find that I could understand a lot (if not all) of what he was saying!

Angie, the daughter of Ana (who owns and runs the Casa Ana hostel) met me at the hotel door, quickly showed me to my room and explained some basics like where the bathrooms are and what the WIFI code is, and I was in bed by 12:45 – still a little too wired from my new adventure to sleep until after 1:30.

On Friday morning, I got up about 7:30am – had a simple breakfast at the hostel (bread, butter, and peanut butter) and then took a walk in the neighborhood. I found a really cool little market where scores of stalls sold food, hardware, clothing and about anything you could imagine. I bought some plaintains and two bottle of water. My Spanish was good enough to make plain what I wanted to buy and to answer “Si” when the water vendor asked if I wanted “sin gas” (without gas… i.e. non-carbonated water.) It’s so much fun to use my Spanish!

Friday afternoon, I had arranged to take a “Shantytown Tour” with a company I found on TripAdvisor. The company’s name is “Haku” (Quechua for “Let’s Go!”) Tours and Edwin, the owner, was my guide. He brought along a new tour guide who was being trained so I had the luxury of being accompanied by Edwin and Celia, both of whom are descended from mountain (Inca) families.

The Shantytown area we visited is home to about 400,000 Lima residents, most of whom are pretty poor, although most of them work, send their children to school, and live decent lives. I asked if the area was similar to the Flavellas of Rio de Janiero and Edwin said yes, that the situation was similar in that the people had been “squatters” on the land until the government acknowledged their right to live there. Edwin has a master’s degree in eco-tourism (from a German university) and has made it a personal mission to help the people in this shantytown. He says other tour guides have told him he must be crazy to think western people might want to see these areas but, in fact, this tour is one the most popular of all the Haku tours.

Three strong ladies are the effective government of the shantytown and Edwin is using the money earned from the tour to help them. We visited a kindergarten, a silversmith shop, and several homes (from the outside), and most of the people were very welcoming to me. One lady asked Edwin if I was a priest – he explained to me that in the 1970’s the first “white” visitors to the area were priests. Apparently, white visitors are still rare enough to lead someone to think I’m a priest. Edwin asked that I not take photos of people unless I asked permission and we did exactly that several times. We bought some plaintains and limons (limes, I think) to give to the children along the way. One of the groups of kids we met are in this photo. 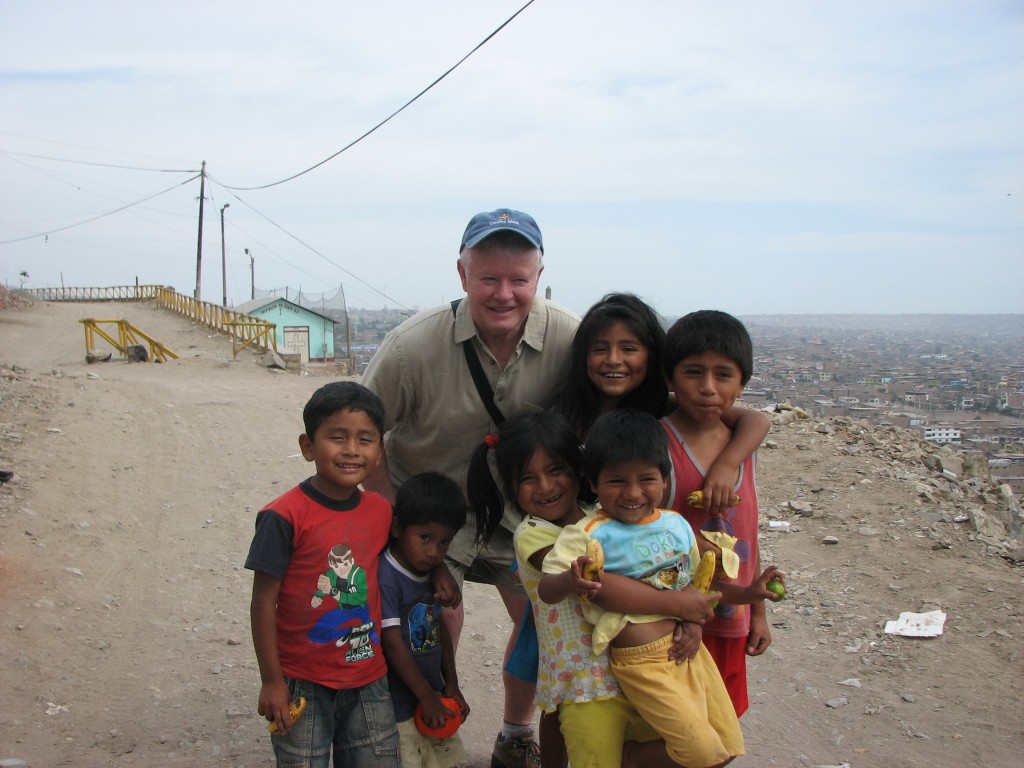 Edwin tells me the people enjoy having a copy of the photos taken with the visitor so he asked me to send him copies via email. 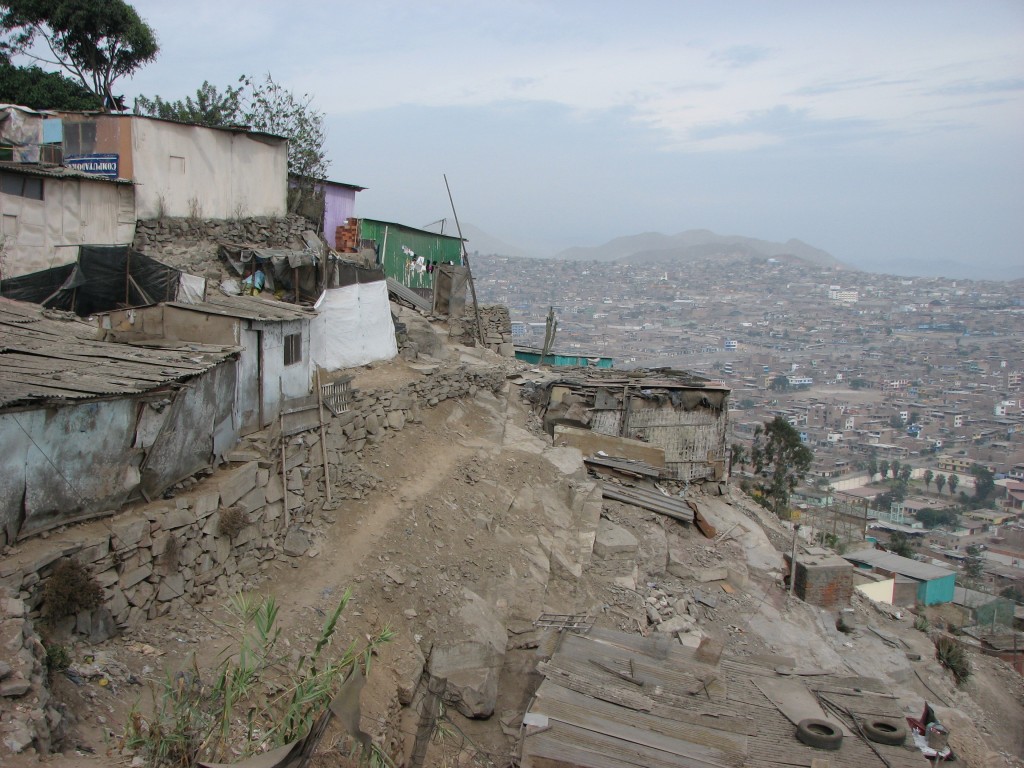 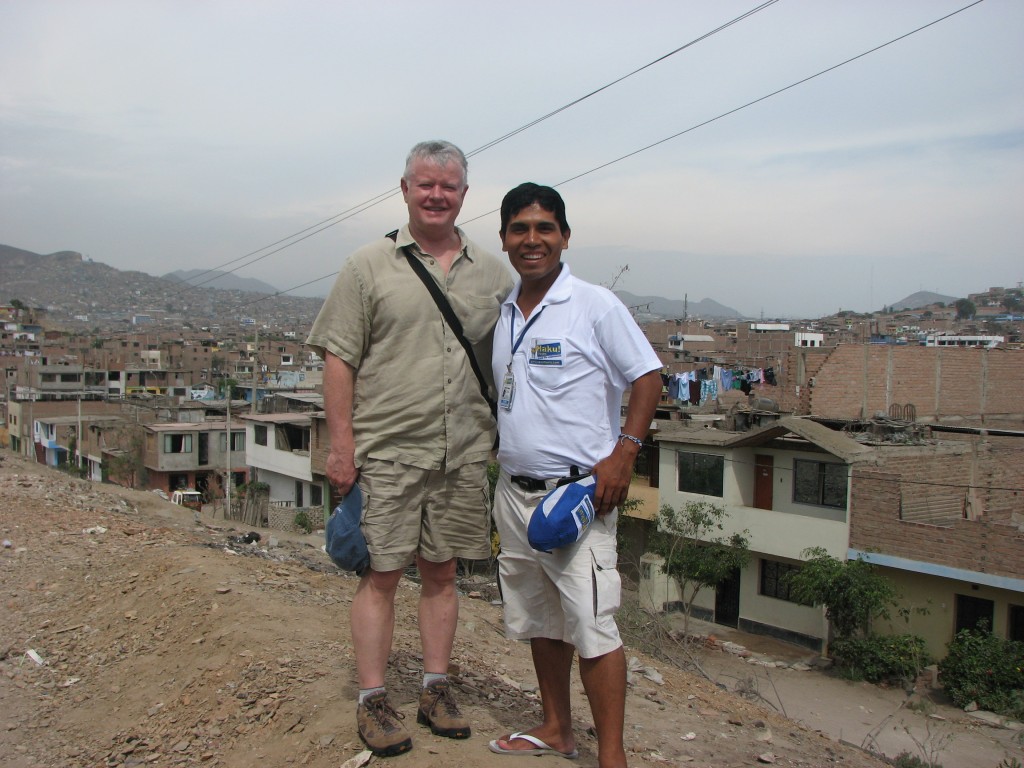 With Edwin of Haku Tours

It was a wonderfully interesting afternoon. You (and I) might think seeing people living in such poverty is not very uplifting. But, perhaps because these people have shelter, enough food to eat, and live their lives with dignity, it was not too depressing. Mostly, I felt good that we treated them with respect and that the proceeds of the tour are going toward helping them (about 2 weeks ago, Edwin paid for a new roof for the kindergarten.)

Edwin and Celia dropped me off at my hotel late that afternoon. I enjoyed the tour so much, I booked another tour with them for Saturday morning. More on that later…