It’s been a very nice week here in Huaraz, Peru. I came here on the overnight bus from Trujillo about eight days ago. The bus left at 9:30pm, heading south for several hours before turning east and starting the slow climb into the mountains. Of course, I couldn’t see any of the countryside at night: I tried to sleep in my very comfortable seat which reclined to nearly horizontal but I got only an hour or two of sleep. I was awake when the sky started to lighten and I could peak out at the sleeping pueblos in the now mountainous terrain. By 8:00am Saturday morning we reached Huaraz, about 10,000 feet above sea level. I didn’t feel any immediate effect of the altitude but the uphill walk to my hostel dragging my luggage made it clear breathing was more difficult here.

The first thing I noticed about Huaraz was the beautiful setting: spectacular snow-covered mountains in the distance and green hills all around us. Clearly, they get a lot more rain here than on the coast. Although Huaraz is only about 150 miles from Trujillo, it felt like a different country. As I walked to the hostel I passed a man leading a cow down the street. I made my way uphill to my hostel, the Alpes Huaraz. I had read great things about this hostel on TripAdvisor.com and was hopeful my room would be nice. As I sit here 8 days later, relaxing in the dining area until catching my bus to Lima at 10:00pm, I feel it was the perfect place to relax and see a little of the mountains. Run by owners Rosa and Juan (who are of my generation) it provides clean, comfortable, quiet rooms with private baths for only $17(USD)/night. This includes a continental breakfast: for a dollar or so more you can add eggs to it. The breakfast dining area includes an outdoor patio and a comfortable, bright indoor seating area that doubles as a lounge area at any other time of the day. Of course, WI-FI is available throughout the property,

Rose and Juan are delightful. They don’t speak English (Rosa understands a lot) but there is always an English-speaking staff member on duty. Alpes-Huaraz is a very popular hostel for backpackers and trekkers. This region of Peru has some of the best climbing/hiking opportunities in the western hemisphere, including the Santa Cruz Trail. Most of the guests here are young but a few are of my age. The video below will give you a feel for the hostel. 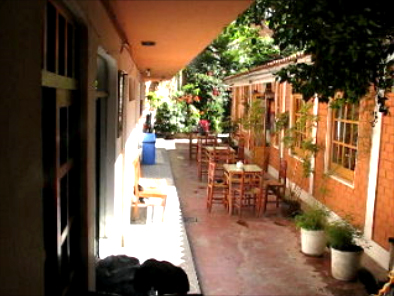 The Town of Huaraz

Being a mountain town, many of the people here are descendents of the native “Indian” people who were here long before the Spanish arrived. The history of these peoples is long and complicated but I can tell you that they are descended from multiple sub-cultures that have lived in the area over the centuries, the most recent being the Incas. They are darker-skinned, have their own customs and way of dressing and even their own language, Quechua. Coastal Peru (e.g. Lima, Trujillo) is where the colonial Spaniards settled and established their power base after crushing the Inca Empire. Therefore, there are more fairer-skinned people there who are descendants of the Spanish colonialists. The true story of Peru is complicated and beyond my knowledge base. For an excellent overview of Peruvian culture, ethnicities and history, see this article.

Huaraz is much smaller than Trujillo and very different in character. There are no malls, no movie theaters, no Starbucks or KFCs. Everything is much greener because it rains frequently and you often hear birds singing. The following video will give you a little taste of the city of Huaraz. 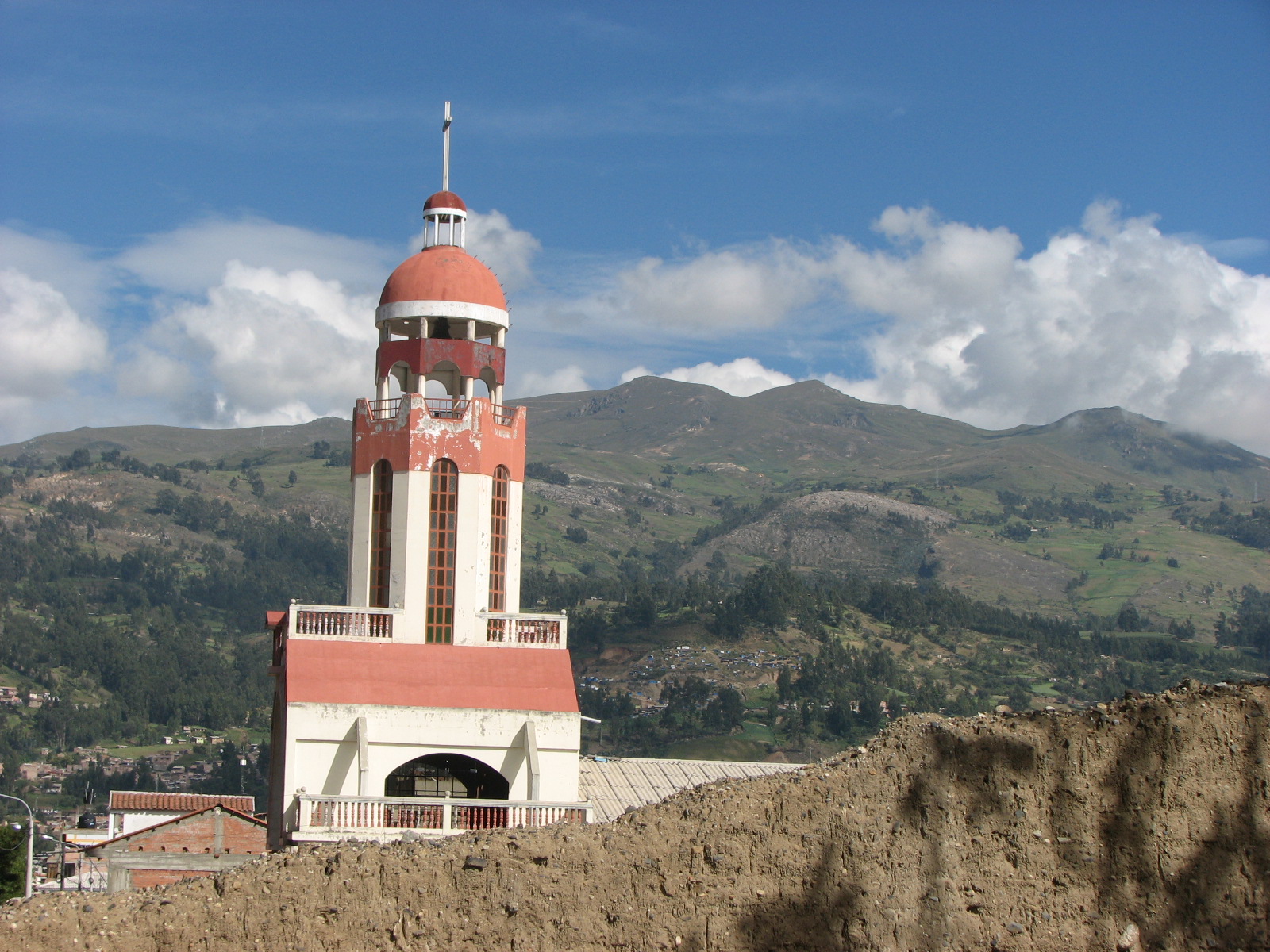 In addition to the multi-day trekking opportunities, many day tours are available and I took several of these. The English-speaking staff at the hostel arranged for the tour company to pick me up in front of the hostel.

This ancient site had human occupants at least as early as 3000 BC and served as an important religous/ceremonial center for the Chavin civilization which was centered here between 1200 BC and 400 AD. As a UNESCO World Heritage site, excavation and research is still in progress. Its multiple temples are made from large, skillfully carved stones, demonstrating a mastery of stone masonry that the later Incas continued to refine in monuments in Cuzco and Macchu Piccu. Religious ceremonies in Chavin de Huantar seem to have involved the ingestion of mescaline (from a local cacti): apparently to help the shamans communicate with the gods. I learned most of this from the Wikipedia article because our tour guide spoke no English. Although I could pick up a few things, he spoke rapidly and I found it exhausting to try to keep up with him. Overall, I’m not sure I would say it was worth the 3-hour (one way) bumpy trip from Huaraz, although there was some spectacular scenery along the way. Unfortunately, it’s difficult to get good photos/videos from a van on such a bumpy road. Some photos of the day are below. 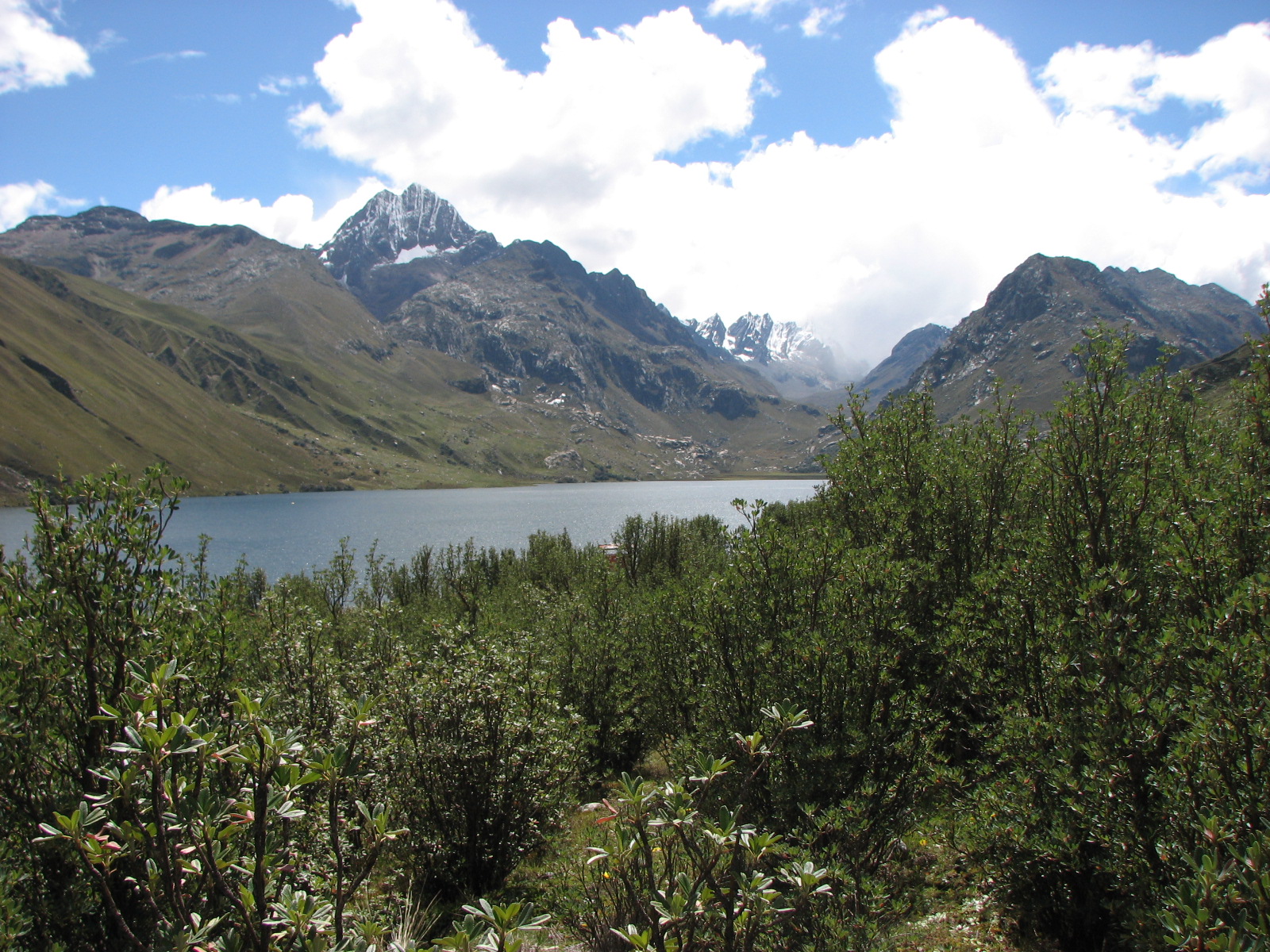 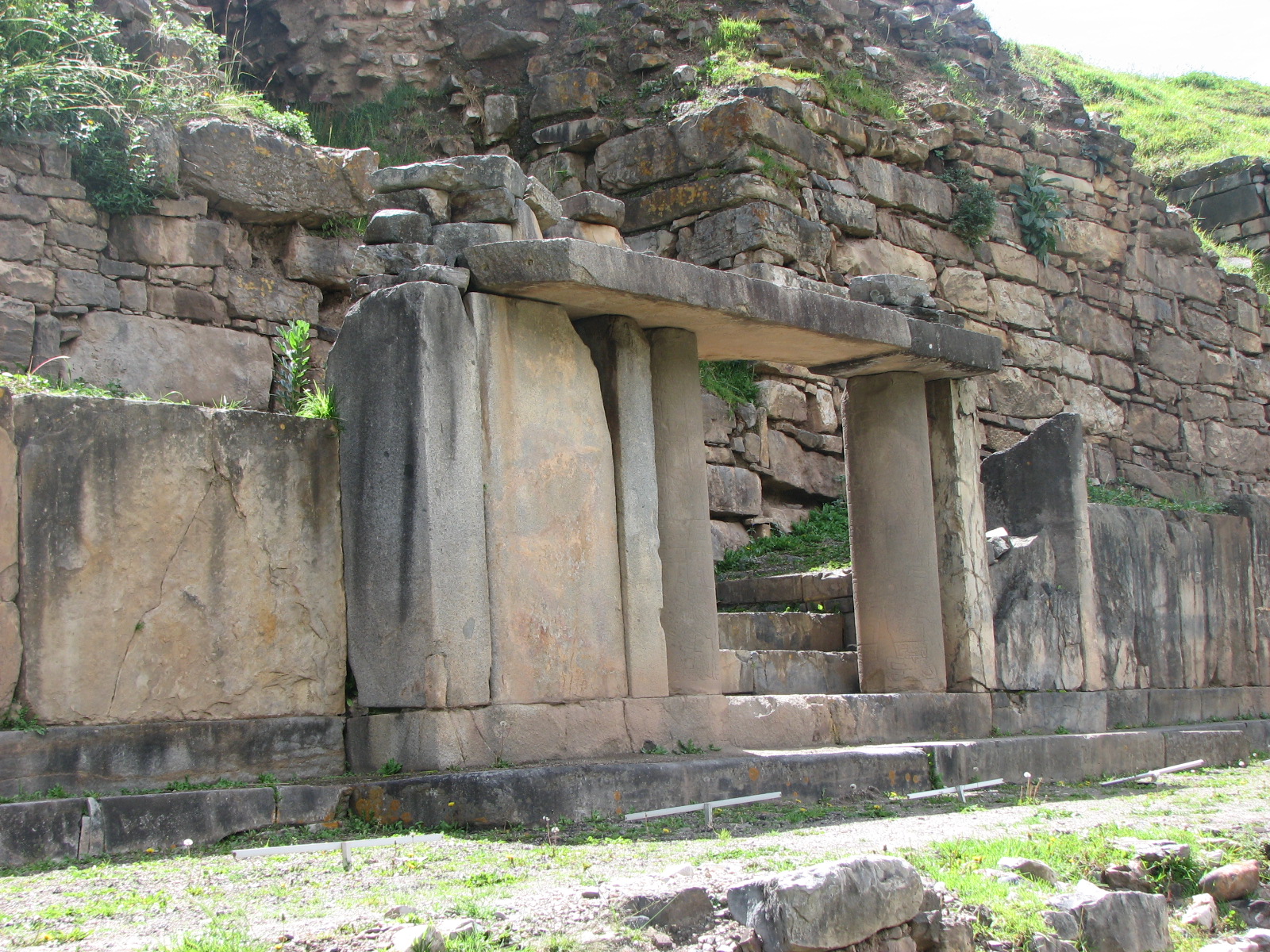 Entrance to One of the Partially-Unearthed Chavin Temples 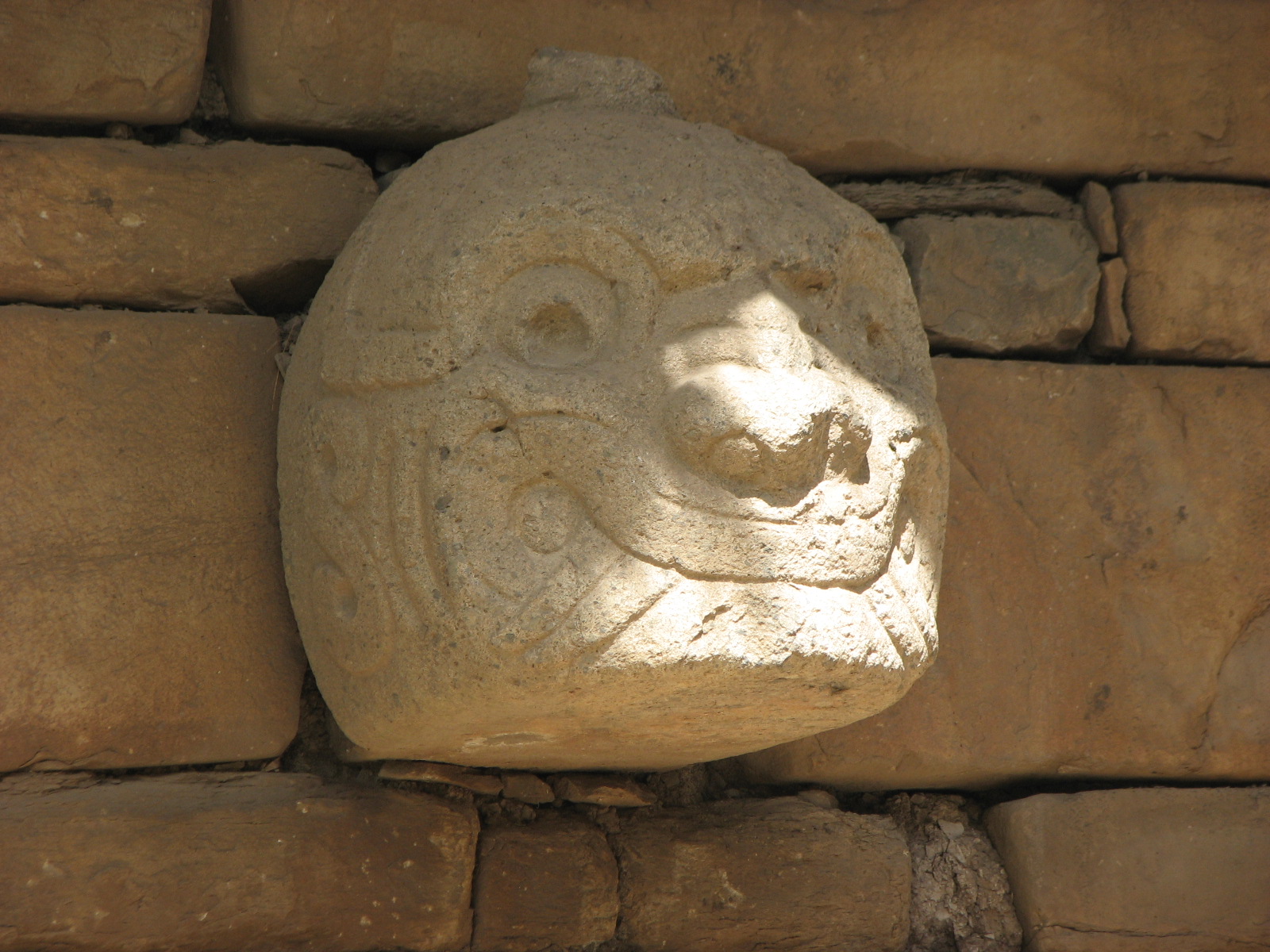 One of Many Stone "Gargoyles" Adorning Exterior Walls of Temples 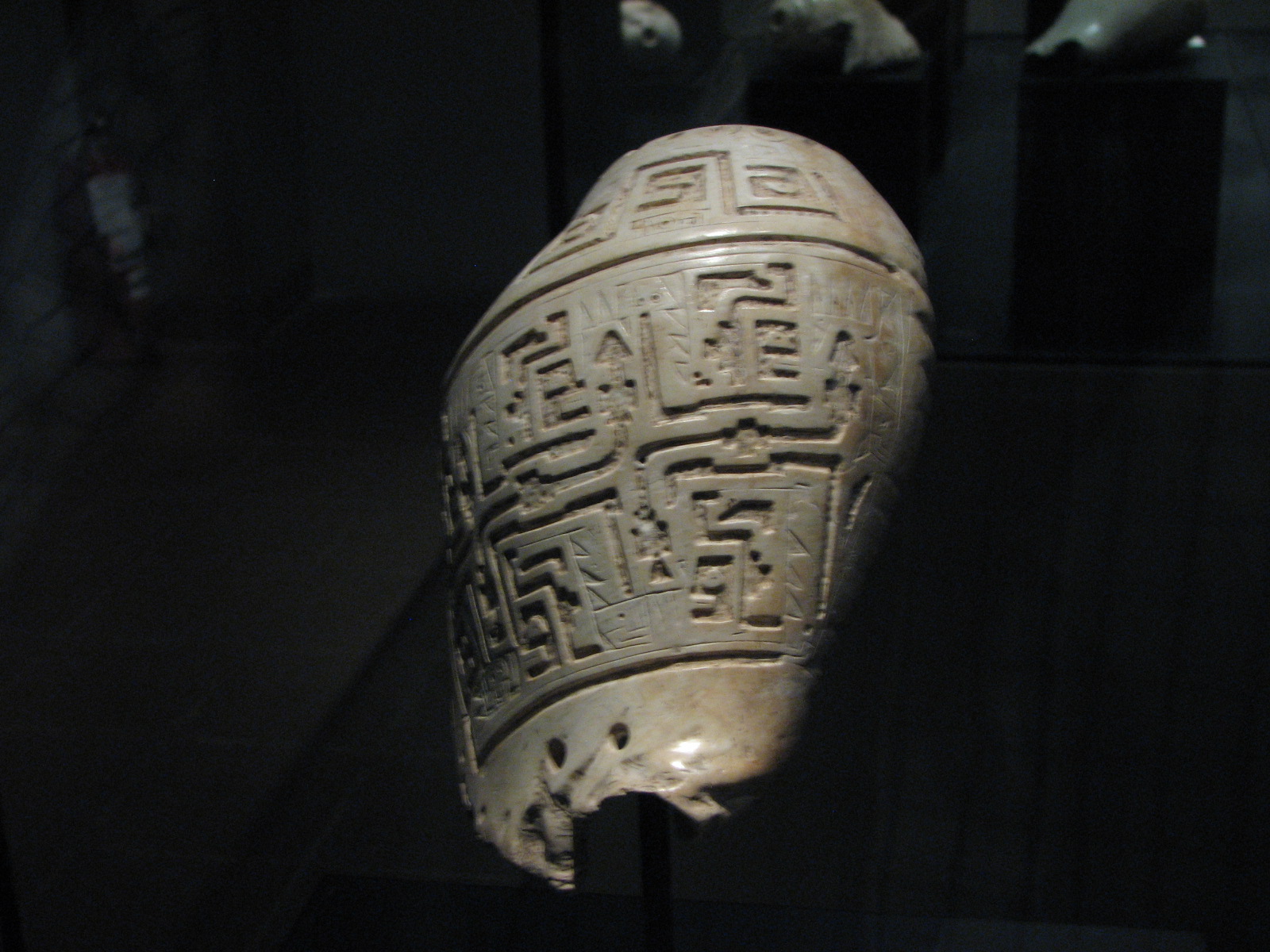 Hiking in Huascaran National Park
Near Huaraz there is a national park named after the mountain which is the fourth highest in the western hemisphere (22,000 feet). One of the day tours was a six-hour hike to an alpine lake in the park named Lago 69. To get to the trail head we had to leave Huaraz at 6AM and ride for 3 hours over very bumpy roads. The hike starts at 13,100 feet and concludes at the lake at an altitude of 15,000 feet. It takes about 3 hours to reach the lake and about 2 hours to return to the trail head. I had been taking altitude-sickness pills prescribed by my doctor in anticipation of having trouble breathing at these heights. All of the other hikers in my tour group were young people from Israel and I wondered if I would be able to keep up with them. It turned out I couldn’t make it all the way to the lake: I was just too exhausted to make the final push up a very steep ascent of 100 meters. Knowing that the trail included many places where you trampled over wet rocks, it seemed wiser and safer to turn back and save my strength for the 2-hour return journey. I was a little disappointed not to see the beautiful lake but the path itself was quite beautiful and I enjoyed it greatly. I wasn’t sure if altitude played a role in my exhaustion – it seemed to me that it would have been difficult to do the same climb starting at sea level!
Video: Hiking in Huarscaran National Park (click on photo) 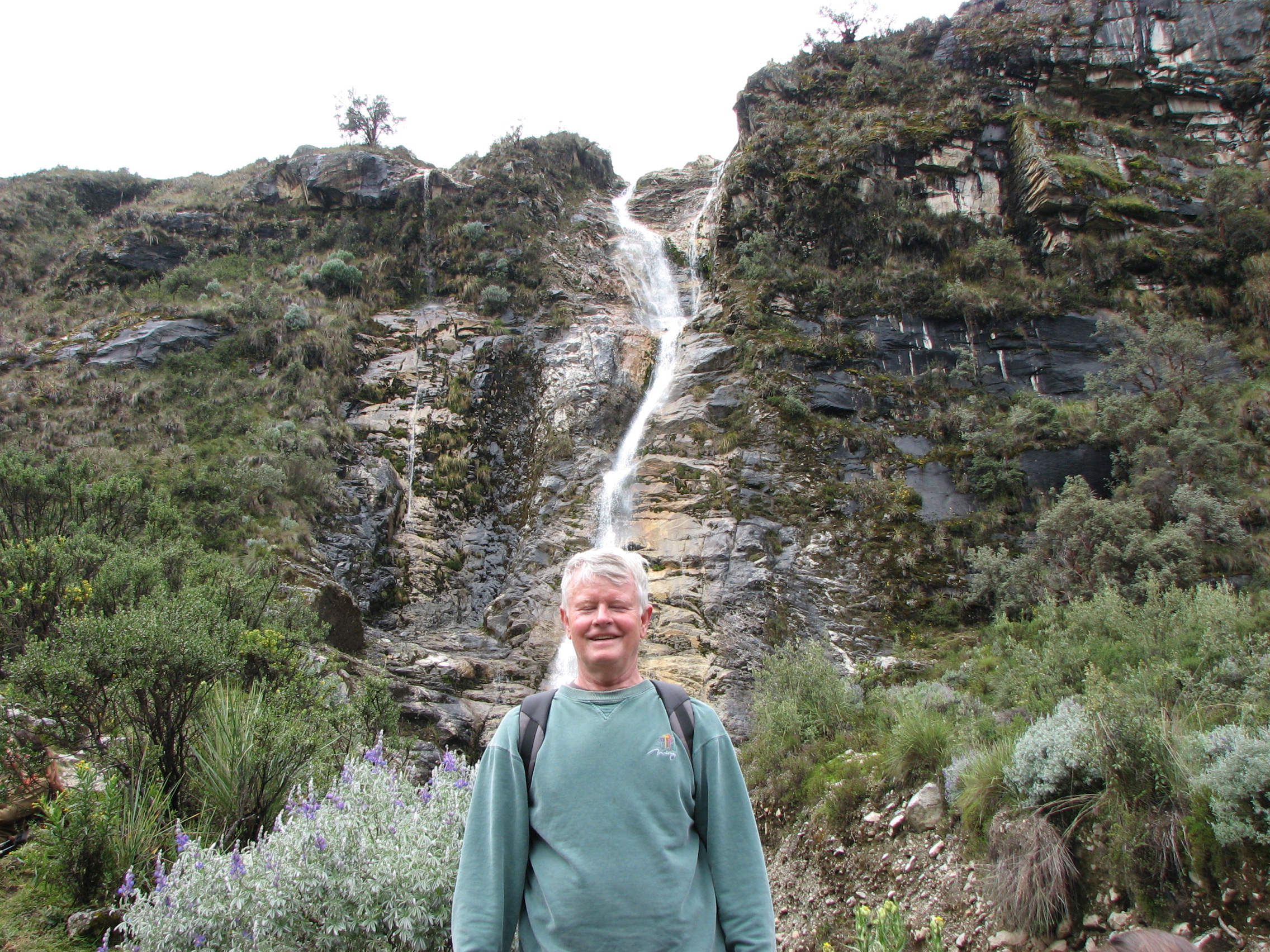 One of the Waterfalls on the Trail to Lago 69

Horseback Riding in Yungar
One day I took a horseback ride in the nearby town of Yungar. I arranged to be picked up at the hotel about 8:00am. The man who came to pick me up was about 40 years old, handsome, and off medium build. We made small talk in Spanish and I quickly realized he spoke no English. I was able to learn his name (Eder), that he had three children and eight horses and he asked about my family. We walked to a combi (called “collectivos” here in the mountains) station and caught a van north to Yungar. Twenty minutes later we were dropped off very near his little house which has a small pasture and stable in the rear. It turned out he had his wife Maria lead me on the ride, on a gentle horse that obeyed my every command (except when I tried to make him go the wrong way :-). Maria was wearing traditional Andean women clothing, including the special hat and puffy skirts. I don’t know much about the clothing but I have noticed the ladies wear a large variety of interesting large hats and that they carry both babies and goods in a large cloth wrapped around their back. For more information see this very interesting article on traditional Andean clothing. The ride was supposed to last four hours but I told Maria 2 or 2 and half would be plenty for me. She rode behind me the whole time as I guess she could keep a better eye on my horse if it acted up. I really enjoyed the ride past all the farms and interesting flora and fauna. And the views of Mount Huascaran in the national park were spectacular!
Video: Horseback Ride in Yungar Near Huaraz 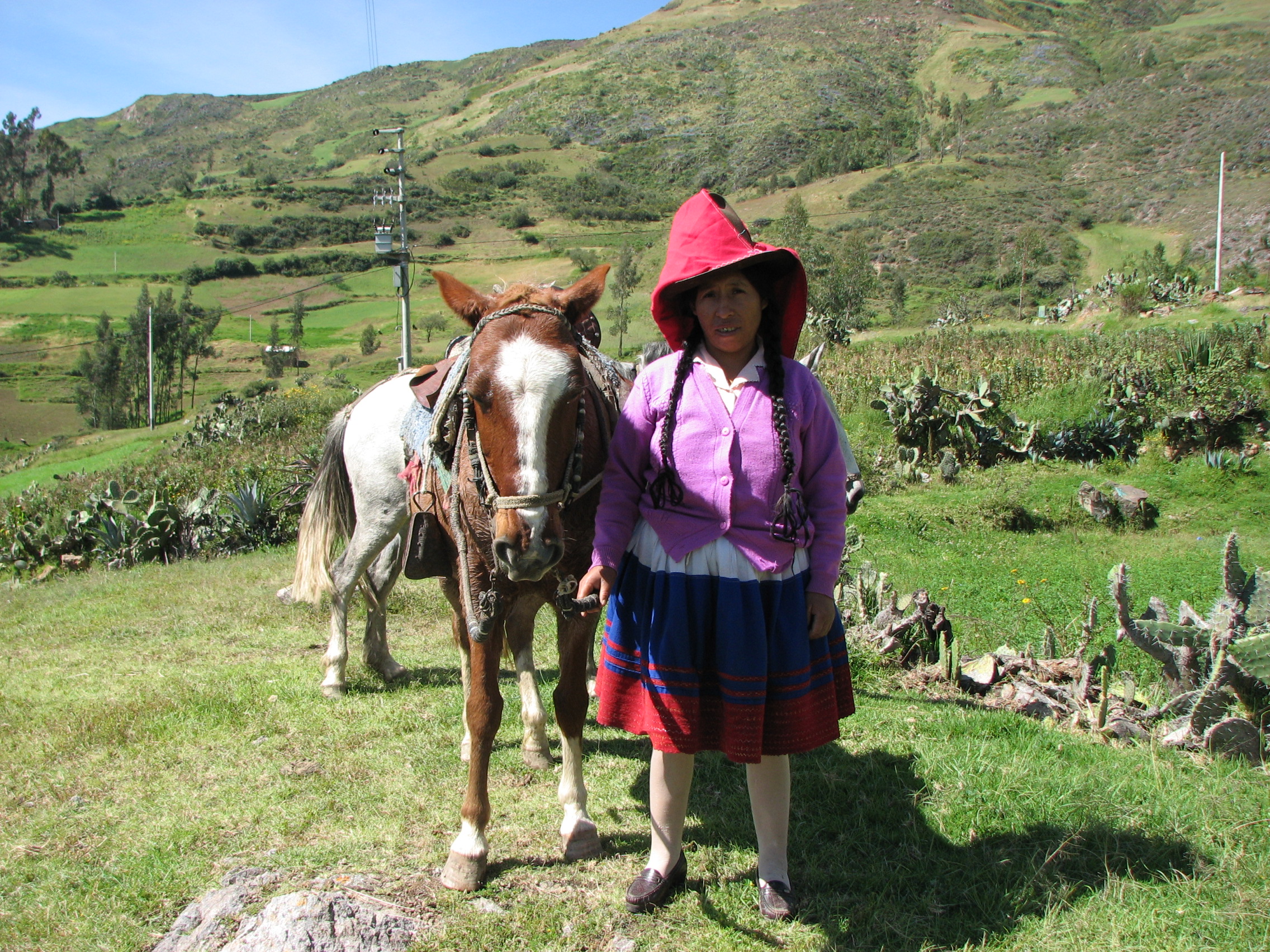 My Trail Guide Maria & Her Horse

Visiting a Glacier in Huascaran National Park
On my final full day in Huaraz I joined a tour to a mountain known as Pastoruri. Also in the national park, but further south, it was about a 2.5 hour drive to reach the mountain. Along the way we saw giant puya raimondi plants, which reach heights of 45 feet when they bloom (and die.) When we reached our final destination, there was a one mile walk to reach the glacier. I found it extremely tiring although it was much less walking/climbing than I had done two days earlier at Lago 69. Again, I failed to reach the top of the trail and, again, I was a little disappointed. However, I was heartened to learn that this trail was even higher than the Lago 69 trail, starting at the same altitude as that lake (15000 feet) and climbing another thousand feet or so. The highlight of the day for me was meeting two nice young Dutch girls, a nice couple from Hong Kong, and a doctor from Seoul, Korea who told me about his sudden need to visit the Galapagos Islands and South America. Some photos from the day are below. 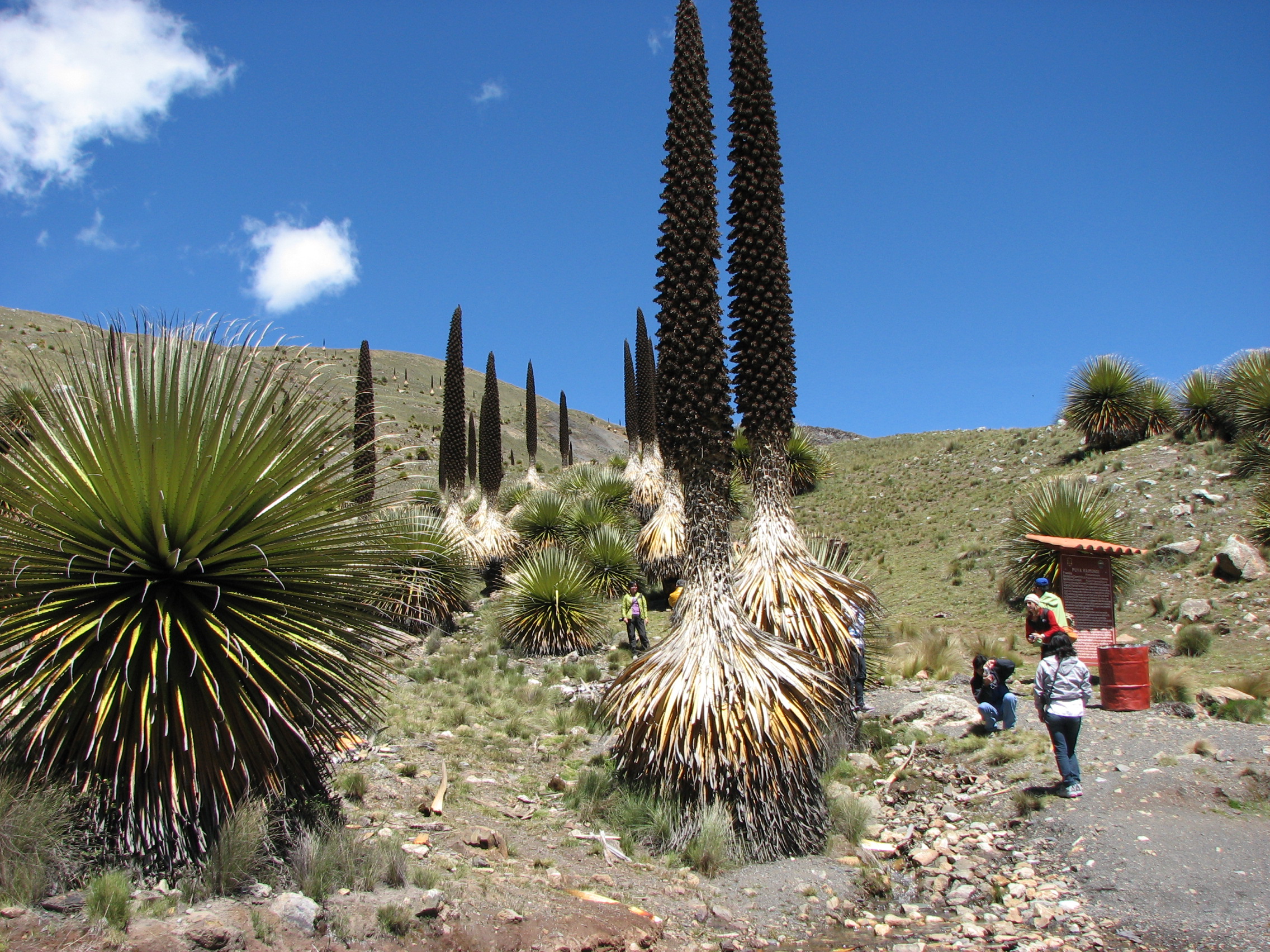 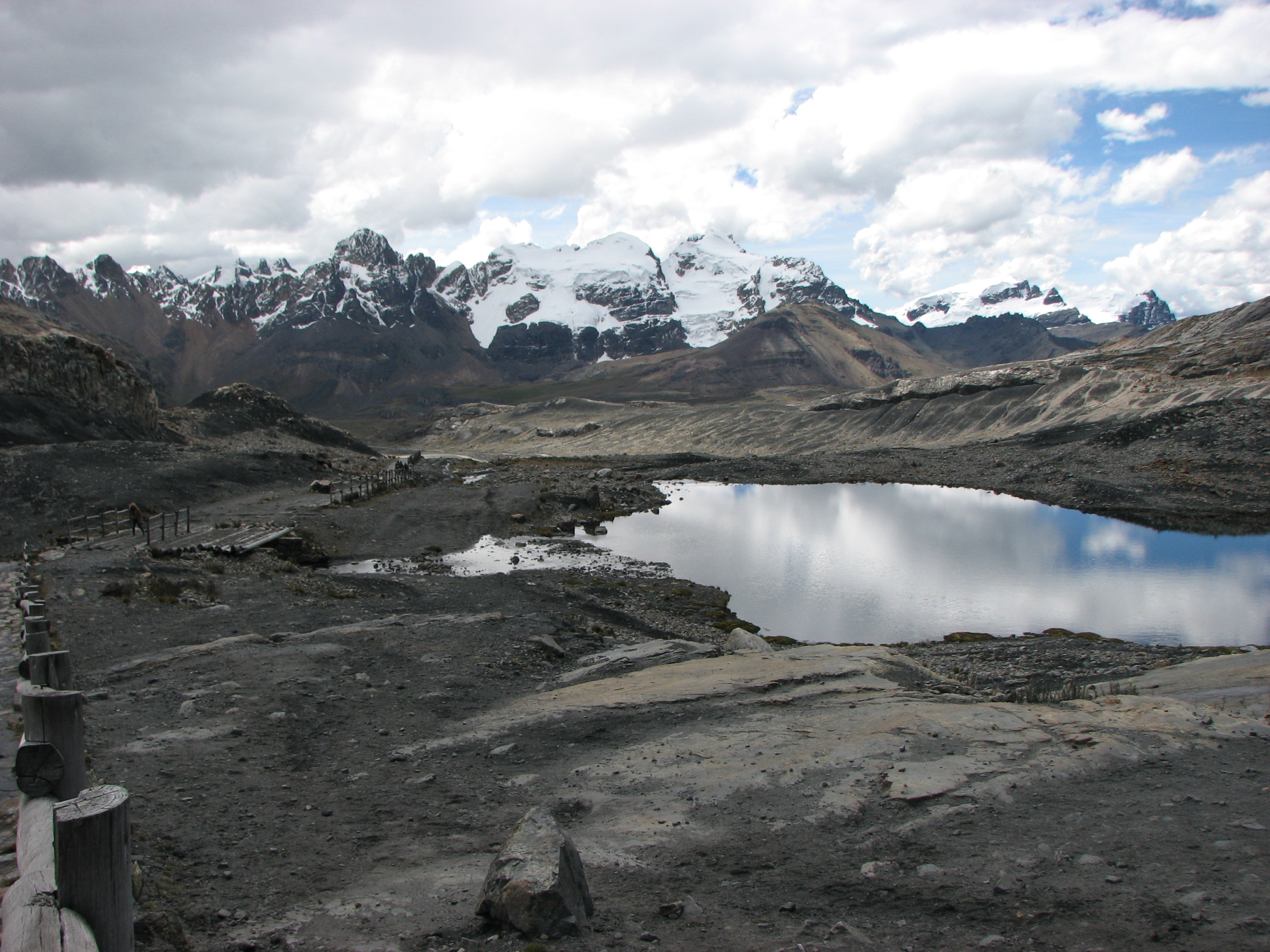 Beautiful View Near the Glacier 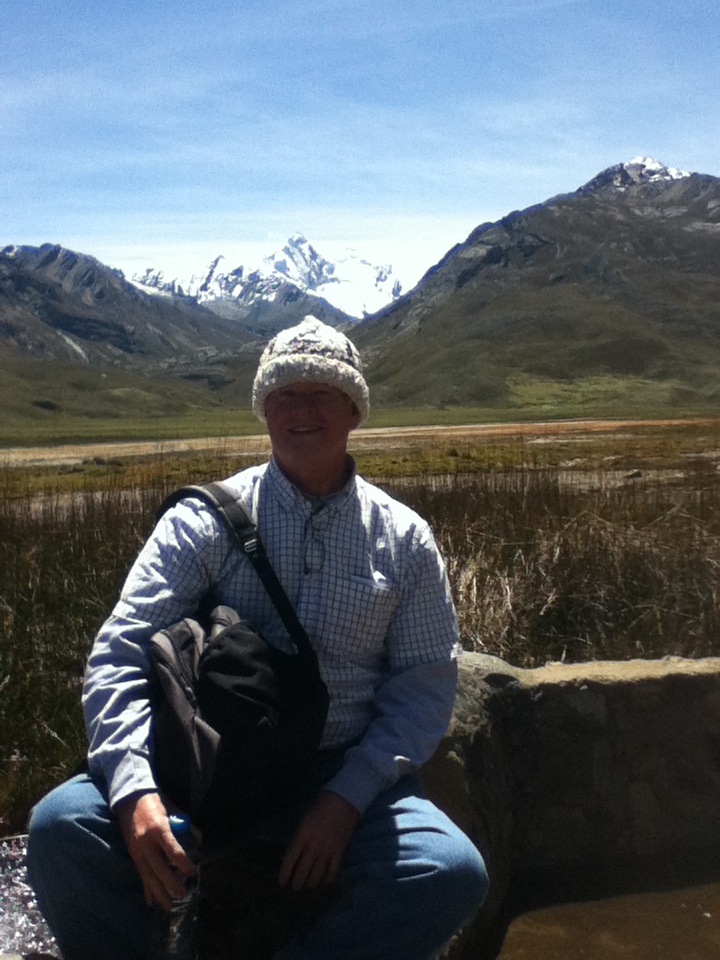 Next Adventure: Together with Grace and Michael!!!!

In just a few hours, I’ll board a bus for Lima. I’ll arrive there tomorrow morning and take a taxi to a hotel in the Miraflores section near the beach. I’ll check-in and spend the day relaxing. In the evening, I’ll go the airport to meet Grace and Michael who’ll be arriving about 10:30pm. It will be SO GREAT to see them! From there, my adventure will become our adventure, family-style!
This entry was posted in Uncategorized. Bookmark the permalink.