Having lived in Trujillo for almost seven weeks, I think it’s time to tell you a little about the city. I will only be here one more week because I’ve decided to leave a week earlier than originally planned.  Many things contributed to this decision but the most important was that I’m tired of the rigorous schedule. Even though I only work three days a week at the schools, I also teach adult conversation class three nights a week.  Add in Spanish lessons, Spanish conversation class and the general tension produced by trying to communicate in Spanish most of the time and you get a fairly stressful work week. I will still meet Grace and Michael in Lima on the 30th but, before that, I’ll spend a week in a mountain city called Huaraz. I’ll leave Trujillo by bus late Friday evening (April 20th) and arrive in Huaraz early the next morning.

The video below will give you an idea of what Trujillo is like. It is the third largest city in Peru, after Lima and Cuzco, but the second largest metropolitan area. It is called the “City of Eternal Spring” which is a reference to the year-round moderate climate. It is true that the temperatures are pleasant even in the warmest months (February through April) but the sun is quite intense and it often feels very hot in the sun. Sun-screen is a must. I don’t like wearing it but I’ve been using 30 SPF every day. The weather reminds me of Los Angeles because it’s pleasant in the shade during the day and it always cools down at night. The locals tell us it doesn’t rain much here but they must get rain in the winter because there are many trees around the city which seem very healthy even though no one is watering them. Some of the trees are very interesting but I haven’t been able to figure out what they are. There are many large ficus trees alongside the streets and they look quite healthy.

The middle-class neighborhood in which we live is apparently safe: none of us has ever felt any hint of danger when walking around here, or in the rest of the city. On the other hand, everything here is barricaded in security bars: all windows and doors of private residences and businesses are basically caged in. And, there are many police present – many of them carrying guns. My guess is these tight security measures are leftover from an era when terrorist groups were wreaking havoc in the cities (as recently as the 1990s). I also know there are many people not far from here who have very little. At night, you’ll find people going through trash bins to find whatever they might sell. One morning I took out our trash to the communal bin at the corner and was saddened to see a man helping his wife into the bin, while their toddler played alongside. It seems likely that it is the poverty of these people that leads to all the security bars on windows and doors.

The video below starts with scenes from the city center and the beautiful Plaza de Armas. This is the oldest part of the city and many of the old mansions and churches are quite beautiful. In many ways, Trujillo seems a lot like Lima, just smaller in scale. People here tend to be very Christian, predominately Catholic, and you’ll see evidence of this everywhere, including in the public schools.

The video moves on to show scenes from one of the large public markets, a very interesting place but also a haven for pickpockets so I’ve not spent much time there. The vast array of different kinds of vegetables, fruits, meats and spices is quite impressive. Sometimes the fish don’t smell so great. However, it is my general impression that food served here is tastier than at home and this may be due to the usage of so much fresh food.

Next, parades. Peruvians seem to love parades. In addition to the El Milagro Children’s Day parade I described in a previous post, I have accidentally run into three other parades in the short time I’ve been here. They are always fun and a great video opportunity. One of my favorite parade attractions is the group in black costumes/hats marching in the religious parade. I don’t think they are a religious group but they were sure fun to watch.

The video concludes with scenes of the most popular form of local transportation: combis (vans) and buses. These are two-man (usually men) operations: one man drives and the other hangs out the side-door shouting to persons on the street, helps people into and out of the combi and collects fares. When I first got here, the sound of someone yelling from a passing vehicle was a little disturbing: it seemed to me it might be a wise-cracking young man yelling impolite phrases at the foreigner. I soon learned that they are just calling out the names of their destinations, trying to coax people into getting on board. Combis run prescribed routes and are marked with letter codes in the front window but, as far as we know, there is nowhere to get a map of these routes: you just have to learn them. Combi drivers and their door-men tend to appear gruff and unfriendly (think New York taxi drivers) and, often, their passengers do too. But I’ve experienced several acts of kindness while riding the combi. One time I got on the wrong combi and about the time I realized it, the door-man asked me where I was going. When I told him, he and the driver flagged down a passing combi that was going to my destination. He then held the other combi there while I moved to it and he even refused to take my fare. 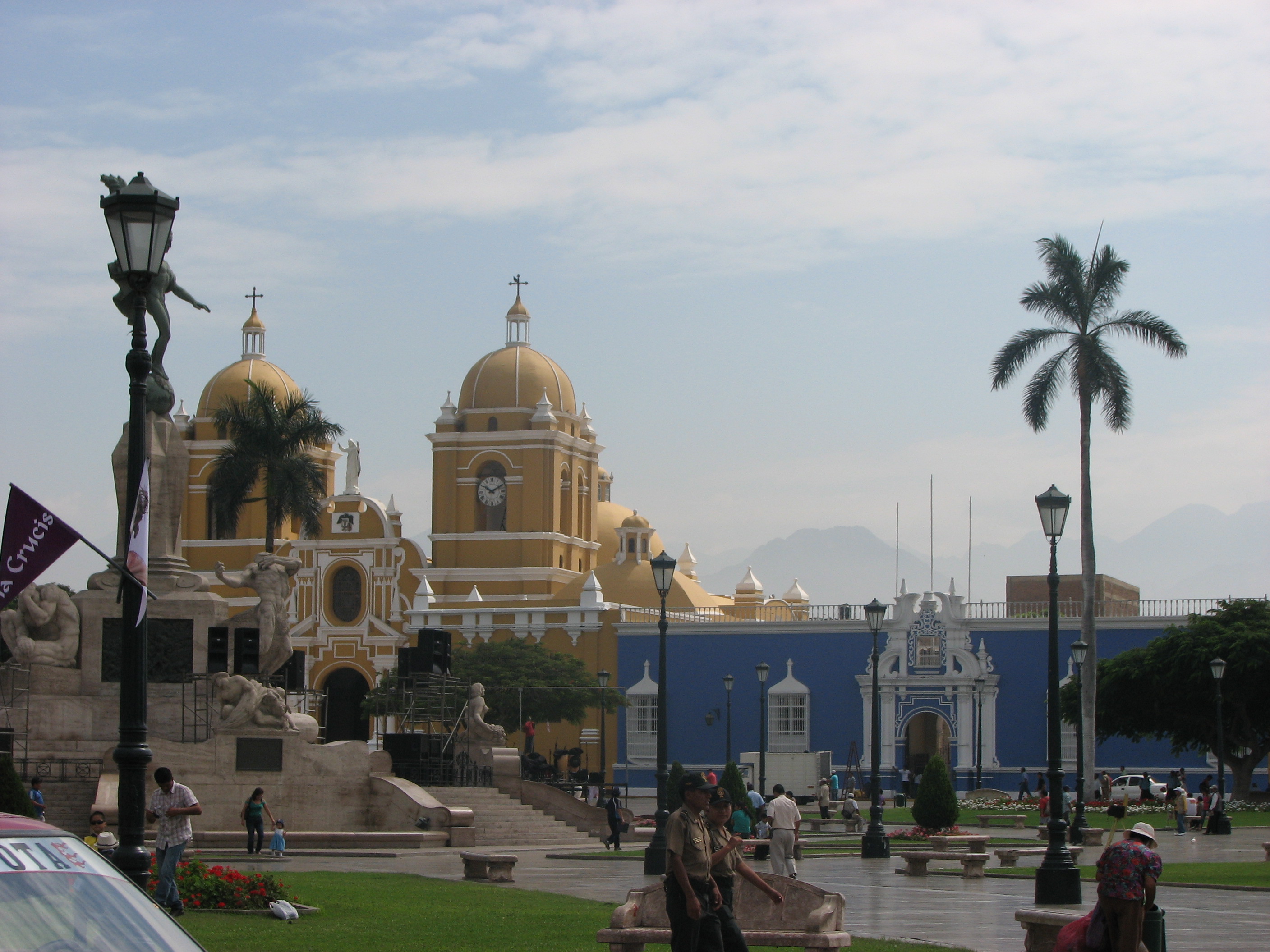 6 Responses to Around Trujillo