Today was the first time I have taken a leadership role during a lesson. I have been a little hesitant to do this because you need to speak primarily Spanish to the kids. This is especially true with the younger kids but even the sixth-graders have a very limited English capacity (though, many of them are clearly very smart.)
Our general teaching method has been to work as a team, often breaking up the class into smaller groups and then rotating the groups. Elizabeth, the former Espaanglisch coordinator who is still here in Trujillo while she continues her job/school search, has made it easy for us by coming to school with us almost every day. She has done most of the speaking to the class at large while the rest of us have mainly worked with the smaller groups. In these smaller groups, I have been a little nervous about my halting Spanish but I have managed. Of course, I always try to learn how to say what I want to say in Spanish before the class begins but I also think the kids are incredibly forgiving of my mangled Spanish. They seem willing to extract the gist of what I’m trying to say no matter how poor my grammar or pronunciation.

Today, I found myself in front of a group of sixth-graders saying things like… “Ahora, nosotros vamos a hablar con frases completas” (Now, we are going to speak in complete phrases”.) I introduced a simple English question: “What is this?”, explained each word’s meaning in Spanish and led them in learning to pronounce each word clearly. I did the same for the simple response to this question: “This is a ________”. Throughout my short presentation, I got good class participation and it felt great to learn I could actually teach using Spanish.

I may have mentioned before that teaching here is very different than the experience I had in China. There, so few Westerners can speak Mandarin that it is not expected. By the end of my second 3-month assignment in China, I could use a few words of Mandarin but could never have explained something in Mandarin. We had the great luxury of having the Chinese teacher stay in the room with us so that, if I ever had trouble communicating, I could ask her/him to translate to the class. Here in Peru, we are given total responsibility for the class: usually the regular teachers leave the room. 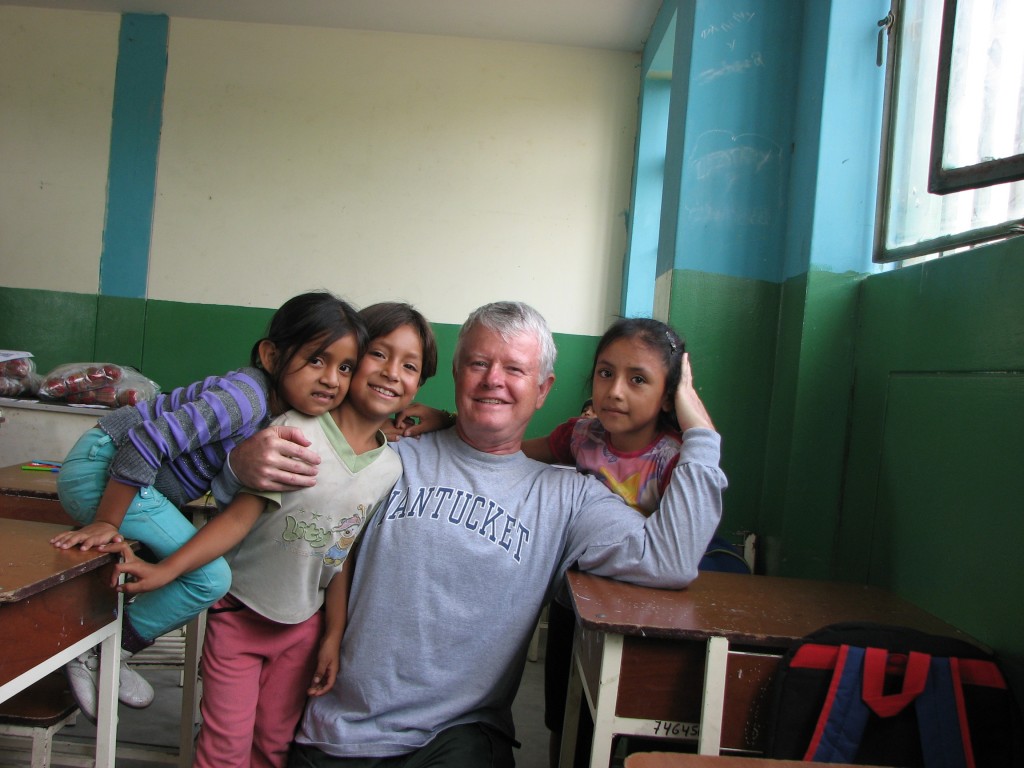 With some 3rd grade students.

Another big difference between this assignment and those I had in China is how much physical effort is required. In China, I taught about 3 or 4 lessons per day, each being about 35 minutes in length. I also lived at or near the school and had all my meals provided at the school canteen or at a nearby restaurant. A Here in Peru we team-teach 3 lessons a day, most of which are 90 minutes long. (Amazing, huh? I’ve never heard of such long class sessions.) We must make or buy our own meals and we spend about 90 minutes per day getting to and from the schools, riding in overcrowded, hot, noisy combis. I never realized how nice I had it in China 🙂 – on the other hand, we did pay a much higher “program fee” in China than here.

One other interesting thing to add to this post before I sign off. Last Tuesday evening at Spanish conversation class, several new people showed up. Most of them were from UK but two were from the USA. One of those was a young man who said he was from New Jersey. When he asked me where I was from, his draw dropped and he really found it hard to believe. He lives on Ashland Avenue within a quarter mile of my home and he recently graduated from Summit High School. Just in case any of you might know him, his name is Alex Przedpelski. He’s young (hasn’t been to college, yet), and very personable. His Spanish is very good too; he apparently spent a summer in Guatemala at some point.

All these young people who are so well traveled still amaze me!