The trip from Lima to Trujillo was long but interesting. I think it’s about 400 miles in total and it took about 9 hours. The bus was a large double-decker with very comfortable seats and air conditioning. When I got on the bus I didn’t realize there were assigned seats. Shortly after taking a nice window seat on the left (ocean) side, a young man politely pointed out to me that I was in his seat. Actually the only part of what he said that I understood was “ventana” (window) but it’s surprising how much information you can gather just by the context of the situation because it was pretty easy to tell what he meant. He showed me to my seat in the front, not on the ocean side but with great views straight ahead and inland.

Heading north out of Lima, the metropolitan sprawl lasted for a least 30 minutes. Much of the area was not very pretty and the standard of living appeared to be very low. Once we left Lima behind, the road became interesting, winding along large, barren hills that sometimes hugged the beach. The ocean was often in view and I enjoyed it. Between Lima and Trujillo are several areas/towns where agriculture was in evidence but, for the most part, it was dry and barren. At times, it reminded me of the drive from Los Angeles to Las Vegas – I certainly wouldn’t want to live out there but it does have a beauty of its own that makes driving through interesting.

The video below shows some of the views along the way. The audio you’ll hear is from the bus TV on which several movies were shown during the day: including Spanish language versions of the recent movies “Hugo” and “The Help.” Too bad I couldn’t see the screen due to sun glare. The final scene in my video (click below) may give you the impression that Trujillo is a ghost town – it’s not – it’s very large with modern malls, cinemas, etc. 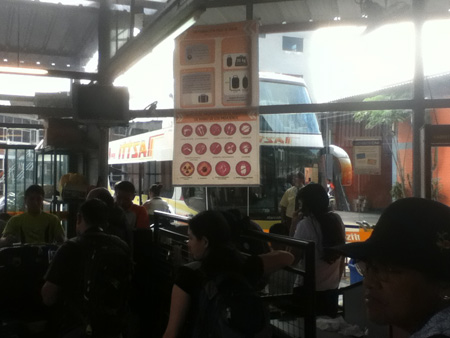